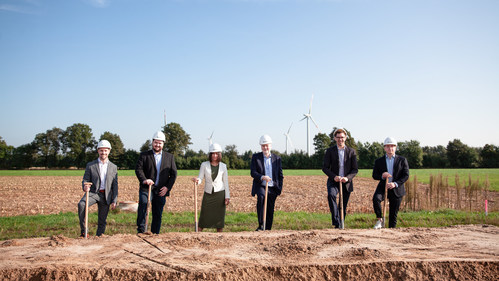 Enapter team breaks the ground for the Enapter Campus

Enapter marked the start of mass manufacturing of green hydrogen-producing electrolysers with a groundbreaking ceremony.

The Enapter Campus, which will be 82,000 square meters and powered exclusively by locally produced renewable energy, will be developed in the climate community of Saerbeck in North Rhine-Westphalia, Germany.

To meet the rapidly-growing demand for low-cost hydrogen generation systems, Enapter is aiming to increase its production capacity to 10,000 electrolysers per month.

According to current estimates, the Enapter Campus will cost approximately €105 million. Goldbeck, the construction partner, will work at a fast pace so that production may begin in the fourth quarter of 2022. The first mass-production customer deliveries are expected to begin in 2023. Around 300 jobs are planned to be created in Saerbeck as a result of the project.

Enapter will be able to lower the cost of electrolysers thanks to automated mass production, making green hydrogen more competitive with fossil fuels soon. The North Rhine-Westphalia Ministry of Economic Affairs, Innovation, Digitalisation, and Energy has contributed €9.36 million to the development of the machinery required for mass production.

“To massively reduce the costs for green hydrogen production and reach global climate goals, we now need to scale existing technologies at speed,” said Enapter CEO Sebastian-Justus Schmidt in his opening speech at the festive groundbreaking. “Our entire DNA is focused on urgency in research, development and market entry: The Campus is our climate contribution under the motto ‘Acting, not talking’. Scaled production of modular, compact AEM Electrolysers for projects of any size will make a substantial contribution to tackling the climate crisis.”

“Enapter’s dynamic approach to fighting global warming has impressed us greatly,” said Jan-Hendrik Goldbeck, CEO of the family-led construction firm. “We are both proud and delighted to work alongside them in building the Enapter Campus and thus contribute to the rapid scaling of their electrolyser production.”