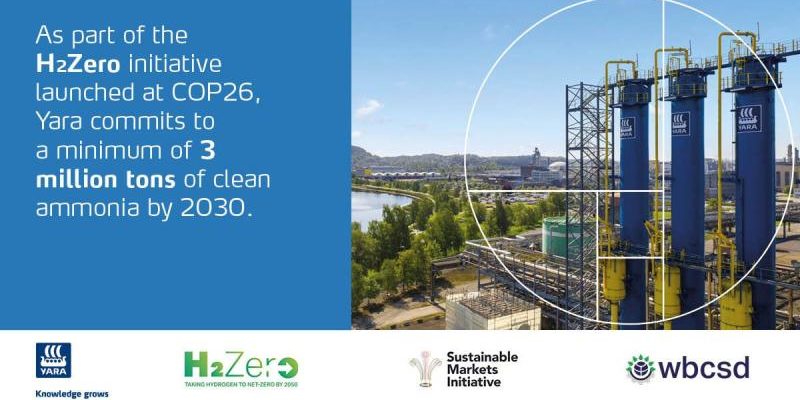 The World Business Council for Sustainable Development (WBCSD) and the Sustainable Markets Initiative (SMI) announced on Industry Day at COP26 the commitments of 28 corporations to accelerate the growth of hydrogen demand and supply.

H2Zero, a new project led by these companies, will expedite the usage and production of hydrogen as a critical component of a future net-zero energy system.

28 firms spanning a range of sectors, from mining to energy, car and equipment makers, and financial services, have made pledges in three areas – demand, supply, and financial or technical support.

According to the Hydrogen Council, hydrogen’s decarbonisation potential might equivalent to about 800 million tonnes of carbon dioxide (CO2) averted per year in 2030. Today’s pledges represent approximately a fourth of this total.

On the demand side, the pledges – which total 1.6 million tons per year of lower-carbon hydrogen – are aimed at replacing grey hydrogen, which is currently widely used in the refining, chemical, and fertilizer industries, as well as diesel fuel, which is widely used in heavy industries such as mining. This would result in a reduction of more than 14 million tons of carbon dioxide per year – the equivalent of the annual emissions produced by more than six million cars in Europe.

On the supply side, the pledges total more than 18 million metric tons per year of lower-carbon hydrogen. This would avert around 190 million tons of CO2 emissions each year if grey hydrogen, natural gas for industrial heat, and petroleum fuels for transportation were all replaced. This would be approximately the annual emissions of the Netherlands and Tunisia combined.

“The uncertainty over supply and the lack of commitment for demand are two challenges associated with the development of hydrogen as part of the global energy system,” said Ben van Beurden, Chief Executive Officer of Shell and Chair of the Hydrogen Taskforce at SMI. “We brought companies together to tackle this status quo and send a strong signal to markets and governments for hydrogen to reach its full potential.”

“Our hope is that these combined pledges spark investments in supply and inspire other users to transition to hydrogen,” added Claire O’Neill, Senior Advisor at WBCSD and former COP26 President-Designate. “To further accelerate the development of the hydrogen market, we are encouraging more companies to join this effort and make pledges. We stand ready to work with any company from any sector who is interested in driving progress towards a net-zero, nature positive and equitable future for 9+ billion people to live, within planetary boundaries, by 2050.”

To transform the world’s energy system, extraordinary coordination between the corporate and public sectors will be required. Policymakers must provide a strong investment framework that will speed the deployment of clean hydrogen, hence offering countless employment and economic growth prospects.

SMI recently released a series of policy suggestions aimed at accelerating the adoption of hydrogen fuel cells for transportation, while WBCSD recently released a set of policy recommendations aimed at accelerating the deployment of hydrogen with the lowest feasible carbon intensity. Hydrogen deployment and rapid scaling up will be critical in assisting countries and businesses alike in meeting their net-zero emissions targets for 2050.