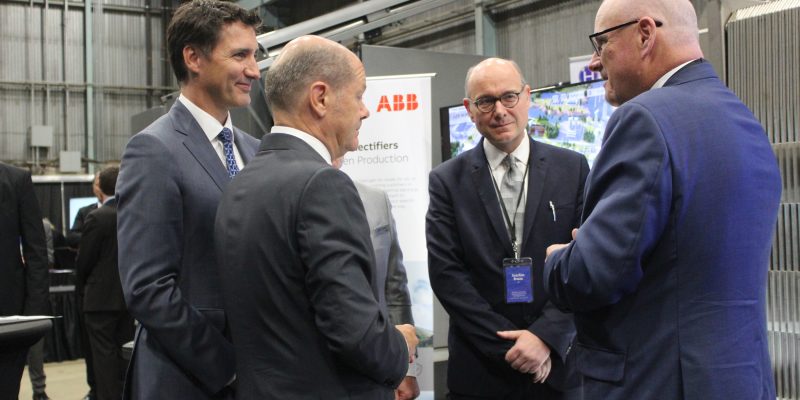 This includes an investment by ABB in Key DH Technologies Inc. (KEY), the parent company of HOI, as they attempt to accelerate the rapidly developing segment of green hydrogen generation with a novel large-scale architecture. The agreement’s financial specifics were not disclosed.

Canadian Prime Minister Justin Trudeau and German Chancellor Olaf Scholz visited the German-Canadian Atlantic Renewable Hydrogen Expo on August 23, 2022 in Stephenville, Newfoundland, where the two firms displayed their green hydrogen innovations. In order to achieve net-zero carbon dioxide emissions by 2050, it is commonly acknowledged that hydrogen must be produced with negligible to zero carbon dioxide emissions.

By accelerating the strategic collaboration between ABB and HOI that was initiated in 2020, the two companies are advancing the deployment of economical large-scale green hydrogen production systems to decarbonize difficult-to-control industries that address a wide range of essential needs, including energy, metals, cement, utilities, ammonia, fertilizers, and fuels for aircraft, ships, trucks, and rail.

Using their respective strengths and resources, the firms will swiftly commercialize HOI’s patented RuggedCell™ high-power water electrolysis technology for the world’s largest green hydrogen facilities. Electrolysis of water is the use of electrical energy to separate water into hydrogen and oxygen. The RuggedCell™ technology turns renewable electricity sources such as hydro, solar, and wind into green hydrogen for industrial use.

“We look forward to building on our companies’ two-year working relationship to pursue the enormous global opportunity of green hydrogen,” said Joachim Braun, Division President, ABB Process Industries. “Following a rigorous validation of the RuggedCell™ technology, we are confident that, in combination with ABB’s high-power rectifiers, it can become a category leader in the large-scale green hydrogen segment. Our complementary technologies will strengthen the Hydrogen Optimized value proposition and fast-track the commercialization of the RuggedCell™.”

“This agreement positions us for success in the large-scale segment with customers requiring installations in the hundreds of megawatts to multi-gigawatts,” said Andrew T. B. Stuart, President and CEO of KEY and HOI. “ABB’s global footprint, commercial relationships and technology leadership in high-power rectifiers, distributed control systems and manufacturing automation provide us with the market reach and capabilities to achieve our company’s goals.”

The global electrolyzer capacity will reach 3,100 gigawatts by 2050, according to a report issued by DNV in June 2022. The company predicts that by the middle of the 21st century, green hydrogen derived from electricity will account for 72 percent of global production.

ABB’s investment in KEY, led by ABB Technology Ventures (ATV), will be utilized to improve HOI’s intellectual property development, build corporate capabilities for expanded business activity, and implement automated manufacturing and robotics. This will expedite the implementation of electrolyzer production at gigawatt scale.