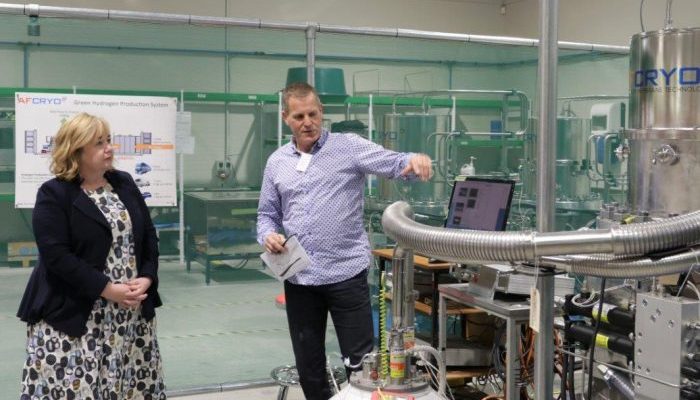 AFCryo, in collaboration with Clean Power Hydrogen (CPH2), has introduced its Green Hydrogen Production System, which aims to provide a more cost-effective and efficient way of producing green hydrogen from renewable sources for transportation, power generation, and industrial use.

AFCryo and CPH2 have signed a groundbreaking agreement to jointly build and sell a renewable hydrogen and oxygen production device that can be used on demand. AFCryo is preparing to ship its first production device to CPH2 in the United Kingdom, where it will be integrated with its electrolyser technology in preparation for a commission to build Ireland’s first 1MW (megawatt) electrolyser-based system to generate pure hydrogen and oxygen.

AFCryo’s Managing Director and co-founder Christopher Boyle says the organization is on a mission to bring hydrogen to the global energy network in order to assist governments, industries, and energy users in meeting ambitious pollution reduction goals.

Hydrogen is one of the most scalable and viable options we have to help us make the energy transition to a lower-carbon economy.  By joining forces with CPH2, we’ve created a faster, more reliable and more cost-effective renewable energy hydrogen production system. Importantly, the oxygen, considered a bi-product of the hydrogen production system, is pure enough to be captured for use in industry or injected into existing waste-water systems to improve the aerobic process.”

“This technology is ready to help transport networks and industries globally transition to hydrogen to help achieve zero-carbon targets. In New Zealand, an immediate opportunity is to turn the hydrogen refuelling network concept into reality with our technology for on-site and on-demand hydrogen production. We can manufacture our system as a re-locatable containerised module – ideal for a decentralised refuelling network – or as a large scale production plant,” he says.

Government Minister Megan Woods, who has the Energy and Resources portfolio, as well as that of Research, Science and Technology says the project is an exciting development.

“This is exactly the kind of collaboration that will start to un-lock a new energy future for New Zealand as we seek to decarbonise our economy and have less reliance on fossil fuels.”

£1M in scaling up hydrogen-enabling technologies