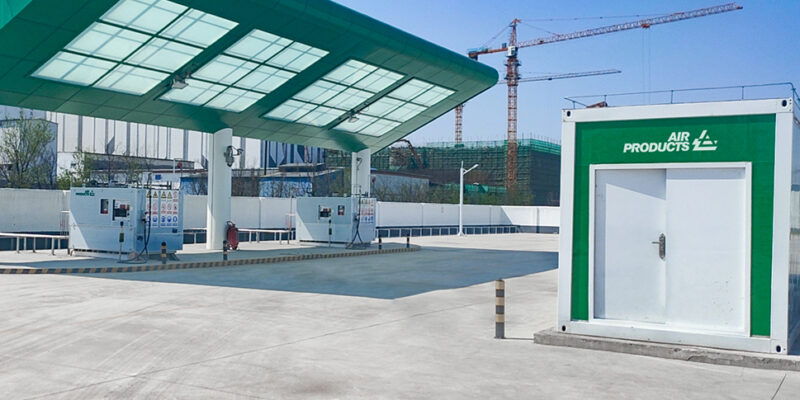 The station will be used to refuel buses and vehicles in support of China’s “Hydrogen into Ten Thousand Homes” demonstration project for green transportation.

Throughout support of this national initiative, the business has advanced many hydrogen production and application projects in the province.

The “Hydrogen into Ten Thousand Homes” demonstration project was launched by China’s Ministry of Science and Technology in collaboration with the Shandong provincial government to promote the widespread use of hydrogen energy and demonstrate hydrogen applications in industrial parks, community buildings, and transportation in order to establish a hydrogen-powered society.

Air Products built, owns, and operates the station in collaboration with the local government in Huantai County of Zibo City. It is the company’s first and one of the first hydrogen fueling stations in Shandong. It is constructed to world-class standards and equipped with the company’s patented fuelling system and two state-of-the-art dispensers, powered by hydrogen produced at the company’s Zibo manufacturing facility. The station is capable of fueling many fleets of public buses and logistics trucks.

“Shandong has a strategic roadmap with clear targets for hydrogen development. As a leader in hydrogen and hydrogen for mobility, Air Products is honored to contribute our expertise, technologies and end-to-end solutions to this strategic demonstration project that will greatly drive the development of hydrogen energy in the province and across the country,” said Saw Choon Seong, Air Products China president. “We are committed to continuing to support China’s 14th Five-Year Plan and ’30·60′ decarbonization goal to drive sustainable development, together with local governments, our customers and partners.”

Shandong possesses unmatched advantages in hydrogen energy resources and has created a comprehensive hydrogen industry value chain encompassing production, storage, transportation, and future development applications. The provincial administration has outlined a ten-year strategy for advancing the hydrogen energy industry and establishing a “China hydrogen Valley” and “Oriental hydrogen Island.” Shandong was the first and remains the only province approved by the central government to carry out the demonstration project “Hydrogen into Ten Thousand Homes.” To expedite the deployment of this project, the provincial government recently hosted an international partnership promotion event, inviting 18 top multinational businesses, including Air Products, and more than 20 local hydrogen energy sector leaders to exchange ideas.

Air Products has over 60 years of experience with hydrogen and a sizable patent portfolio in the field of hydrogen dispensing technologies. The company has been involved with over 250 hydrogen fuelling projects in 20 countries, with their fueling technology accounting for over 1,500,000 hydrogen fills each year.

Since 1987, as one of the first multinational gas businesses to enter China, Air Products has aided the country’s social and economic development. To promote the use of hydrogen, the firm has participated in various hydrogen demonstration projects, including the 2008 Beijing Olympic Games, the 2010 Asian Games, the 2011 Shenzhen Universiade, and the forthcoming 2022 Beijing Winter Olympics. Additionally, the company has been involved in various hydrogen fueling station pilot projects, including Shandong Province’s first permanent hydrogen fuelling station capable of filling at both 35Mpa and 70Mpa. Since its initial investment in 1995, Air Products has created a strong presence in Shandong, with various operational companies, manufacturing facilities, hydrogen filling station projects, and engineering design competence.

Wood receives over 30 hydrogen awards in first half of 2021