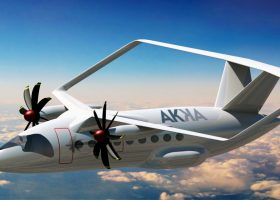 It is a zero-emission idea for regional flights, capable of carrying up to 30 passengers over a 500-kilometer range.

Green&Fly is a regional mode of transport that intends to improve mobility in mid-sized cities without significant hubs. Capable of operating on runways of any length (Short Take Off Landing- STOL), it can leverage existing networks of aerodromes.

This design integrates cutting-edge technologies and investigates numerous configurations in order to maximize the aircraft’s aerodynamic performance and energy consumption, hence increasing its electrification potential. Green&Fly is a light and small airplane (classified CS25) with a futuristic design and a sophisticated hydrogen fuel cell battery and supercapacitor propulsion system.

In comparison to a conventional wing form, the rhombohedral wing shape produces less turbulence at the wing extremity, allowing for a significant reduction in drag, hence opening up new possibilities for a highly efficient propulsion system. The stiffening of its structures is influenced by biomimicry and is modeled after the vein growth process of a leaf in order to maximize stiffening effectiveness while minimizing the aircraft’s mass. To maximize utilization, the interior design is adaptable, allowing the aircraft to be switched quickly from passenger to freighter configuration. The cockpit blends digital technologies and artificial intelligence to enable single-pilot flight. Additionally, the aircraft’s design contains energy recovery landing gear with electric extension/retraction, with the goal of gradually replacing all hydraulic components with electric components in order to cut emissions.

This initiative brought together the Group’s most senior aeronautical engineers in France, Germany, and Romania and demonstrates the Group’s commitment to scaling up renewable energy and contributing to the aviation industry’s decarbonization through technology and innovation.

Mauro Ricci, Chairman of the board & Group CEO of AKKA Technologies declares: “ I am extremely proud of our engineers who have come up with this aircraft concept we are unveiling today. Green&Fly showcases AKKA’s significant expertise in emerging and clean technologies, solidifying our position as partner of choice for our customers as they transition towards more sustainable products and solutions. I am convinced that hydrogen is one of the most promising technologies, paving the way for a new era in the aviation industry, amongst others. Green&Fly is building on our legacy expertise in aeronautics, laying the groundwork for zero-emission aviation of the future..”