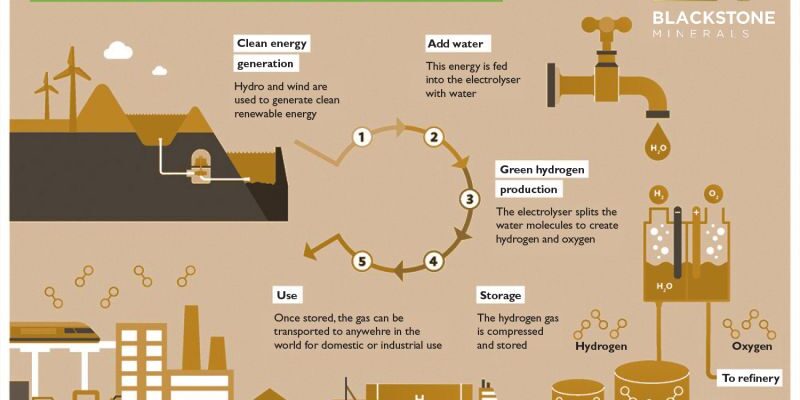 Blackstone shared details on the first of several initiatives being considered as part of the company’s goal of developing a zero-carbon mining operation and downstream processing facility at Blackstone’s flagship Ta Khoa Nickel-Copper-PGE Project in Vietnam.

The Company’s current Pre-Feasibility Study (PFS) needs the downstream processing plant to utilize oxygen (refer Figure 1). Typically, oxygen is generated using a typical cryogenic oxygen plant, which also produces nitrogen as a by-product. However, the Company will research manufacturing oxygen by water electrolysis, which will result in the production of “green” hydrogen as a by-product. This will be accomplished by utilizing ample renewable hydroelectric power and water available at Ta Khoa (Green Hydrogen Study).

The study will include:

The possibility of producing green hydrogen as a byproduct at Ta Khoa bolsters Blackstone’s goal of developing a zero-carbon mining operation and downstream processing facilities at the site.

The following highlights how the green hydrogen concept fits into the Company’s overall strategy:

If the economics of this study are favorable, Blackstone will consider incorporating Green Hydrogen into the Ta Khoa base case and exploring commercialization opportunities for sale to third parties, given the abundance of hydroelectric power and pure water in northern Vietnam.

Guidance on potential of hydrogen as marine fuel by ABS