The first phase planning proposal for a new deepwater port at Balbriggan, supported by Johnny Ronan, will include a green hydrogen plant.

Eight different consulting companies make up the newly assembled Bremore Port project team, which is in the process of applying for a foreshore license and will soon start seabed studies in order to build a breakwater and other crucial components of the planned new port’s infrastructure.

On the boundary of Dublin and Meath, the Ronan Group and semi-state Drogheda Port have partnered to create Bremore Port. Between €740 million and €860 million might be spent on the port’s initial phase, mostly on dredging and breakwaters, although a tiny initial green hydrogen plant is also being considered. Although the technology to produce hydrogen from surplus wind energy is currently expensive, it is anticipated to become more affordable. Bremore’s proximity to Gormanston, where the east-west gas pipeline empties, makes it possible for it to eventually be connected to the current gas network.

A market for clean gas may also ultimately be provided by HGV traffic on the adjacent M1 freeway as well as maritime activity in the future port itself.

The port has hired a new legal team to help it with its application, and it is thought that a public relations team will also be hired. In order to submit a comprehensive proposal for the new port facility in 2024, surveying is anticipated to be finished in the second half of 2019. Depending on the procedure, it is envisaged that planning would be completed by the end of 2025 or early in 2026.

The port is anticipated to be operating by the end of 2027 or the spring of 2028, in time to support the development of significant projected offshore wind farms in the area, such as the North Irish Sea Array. One of a handful of Irish ports that will be able to handle the kind of onshore storage and assembly work needed for the massive turbines that are being planned around the coast is the new port, which has been identified.

The Bremore team was “ideally positioned to develop the infrastructure to fulfill market demand,” according to Wind Energy Ireland’s recent National Ports Study, which also noted that the green hydrogen component represented a significant business potential.

I’m glad that work is being made, said local Fine Gael councilor Tom O’Leary, who encouraged the pertinent statutory bodies to guarantee the port’s timeframes can be reached. It is a really key site, and I’m eager to see the port advance its essential infrastructure for both local and national interests so that we can develop our offshore resources as quickly as feasible. 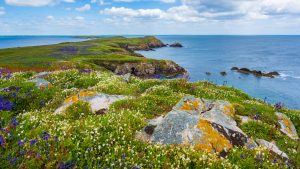