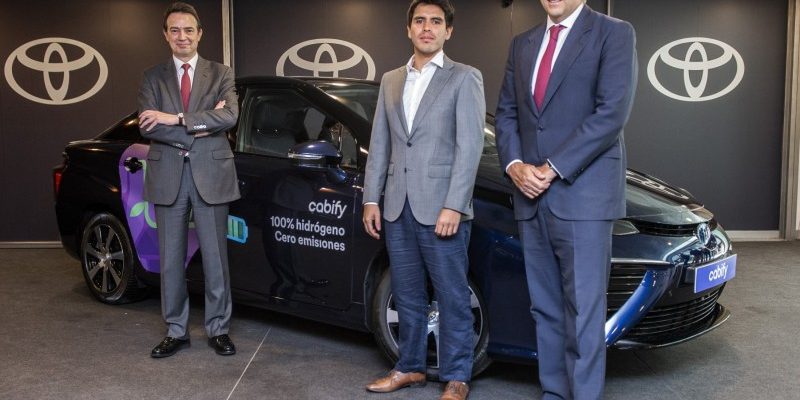 In order to introduce the first fleet of ride-sharing service cars that utilize hydrogen as a source of energy in Spain, Cabify and Toyota have teamed together.

Four first-generation Toyota Mirai vehicles from Toyota have already been delivered to the fleet, which will grow by year’s end. The fact that Cabify is betting on Toyota’s fuel-cell cars is significant for the mobility industry since it is the first time that clients of ride-sharing services in Spain will have access to this technology as an emission-free option.

The Toyota Mirai fleet, which will be used at Vecttor, employs hydrogen as an energy source to create the electricity required to run the electric motor within the fuel cell, with water being the sole byproduct of the entire process. These cars have a range of around 550 km and require only 3-5 minutes to refill, which is comparable to that of a traditional combustion vehicle.

The Toyota Mirai will be offered as part of the Cabify Eco category, which is geared toward business mobility users and solely includes electrical cars (hybrids, plug-in hybrids, and electric). They will also be accessible to private users in the other categories, such Cabify, “Cuanto Antes,” or Kids.

The private hydrogen station that Scale Gas, a subsidiary of Enagás, maintains on Avenida de Manoteras 34 in Madrid will be used for refueling. The first refueling station in Spain that allow hydrogen to be refueled at 700 pressure, it was opened in January 2021.

The importance of having the technology available to supply Cabify with the first hydrogen-powered ride-sharing service fleet in Spain was emphasized by Miguel Carsi, President and CEO of Toyota Spain. Toyota is prepared to advance toward zero-emission transportation, where hydrogen serves as a key energy vector.

“This partnership with Toyota is a significant step forward in our mission to advance sustainable mobility by developing and promoting solutions that improve the lives of individuals, businesses, and urban areas. The voyage will be successful since it will be supported by organizations like Toyota and Enagás, according to Daniel Bedoya, Regional Manager of Cabify in Spain.

“This agreement is in keeping with the strategy established in the Ministry for Ecological Transition and the Demographic Challenge’s Hydrogen Roadmap. It is an illustration of corporate cooperation, a turning point for sustainable mobility, and an extension of Enagás’ commitment to the decarbonization of transportation. In 2021, we opened the first hydrogen refueling station in Spain for long-range fuel cell vehicles through Scale Gas and with the help of our partners, which will supply this fleet of Cabify vehicles and allow us to continue advancing the use of alternative fuels, according to Arturo Gonzalo, CEO of Enagás.

The three businesses reaffirm their commitment to decarbonizing cities, especially in large urban areas, through this effort. Since hydrogen is an endless energy source that can be created sustainably, is simple to store and transfer, and can be utilized in a variety of applications—from transportation to heating and cooling houses and buildings—it is a crucial energy vector in this process.

Cabify, on the other hand, keeps advancing its dedication to decarbonization through cutting-edge technologies. Cabify offset its emissions and those of its passengers after becoming the first carbon-neutral platform in its sector in 2018, and it has since kept its promise to reduce emissions every year. Aiming to decarbonize the fleet connected to its app in Spain and Latin America, the Spanish business also recently unveiled its Sustainable Business Strategy 2022–2025, which will serve as a roadmap for Cabify’s operations and is strongly devoted to battling climate change. By 2025 in Spain and 2030 in Latin America, Cabify still aspires for all journeys on its platform to be in electric or low-carbon fleets.