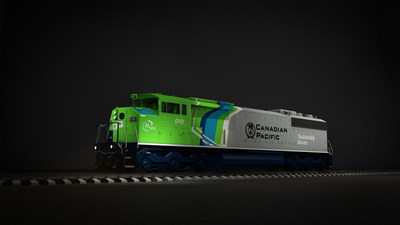 With a $15 million funding from Emissions Reduction Alberta, Canadian Pacific will expand the scope of its pioneering Hydrogen Locomotive Program (ERA).

With the award, CP will be able to expand the project’s hydrogen locomotive conversions from one to three, as well as add hydrogen production and fuelling facilities. In Alberta, the initiative will establish a worldwide center of expertise in hydrogen and freight rail systems.

“CP is proving its commitment to combating climate change via revolutionary technology by extending this innovative initiative,” stated Keith Creel, President and Chief Executive Officer of CP. “I am delighted that ERA has chosen this initiative for funding, and I look forward to seeing a hydrogen-powered locomotive moving CP customer freight in the near future.”

The 50/50 matching award from ERA’s Shovel Ready Challenge program will go to CP. It expands on CP’s previous commitment of $15 million to the development project in 2021.

CP stated in December 2020 that it will develop and build North America’s first line-haul hydrogen-powered locomotive, which would be fueled by fuel cells and batteries. CP will use the award to expand on its early program studies and convert another line-haul locomotive and a yard switcher locomotive. The process of converting diesel-electric powertrains to hydrogen-electric powertrains will be refined across a succession of three locomotive classifications, which collectively constitute the majority of locomotives in service in North America.

The project will include the installation of hydrogen production and fuelling facilities at CP railyards in Calgary and Edmonton to enable hydrogen locomotive operations. An electrolysis machine will manufacture hydrogen from water at the Calgary fuelling station. This facility will run entirely on renewable energy generated by solar panels on the CP headquarters site, resulting in zero greenhouse gas emissions. A small-scale steam methane reformation system will create hydrogen from Alberta’s natural gas deposits at the Edmonton site. The system will be built to permit the installation of greenhouse gas capturing technology in the future.

“Alberta is investing to help lead the way in making energy more cheap, dependable, and clean. CP’s project is a compelling chance to jumpstart the hydrogen sector in Alberta and throughout the world “Emissions Reduction Alberta’s CEO, Steve MacDonald, stated. “The project will aid in the scaling up of technology and lowering of hydrogen deployment costs in order to meet the crucial problem of decarbonizing the long-haul, heavy-freight industry.”

In real-world operations, the Hydrogen Locomotive Program at CP will show and assess the technical performance of hydrogen-powered locomotives and related fuelling infrastructure. The program will provide crucial industry expertise and experience that will help with commercialization and future development.