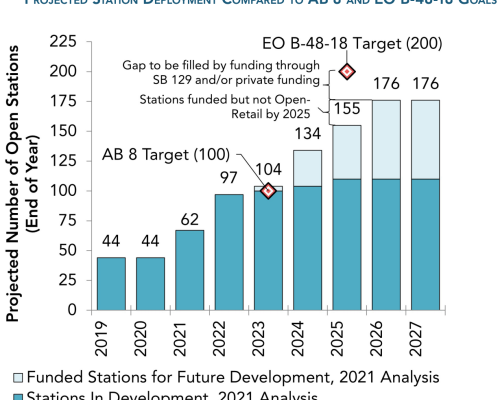 According to Assembly Bill 8, the California Air Resources Board (CARB) has released the 2021 edition of its Annual Evaluation of Fuel Cell Electric Vehicle Deployment and Hydrogen Fuel Station Network Development (2013). This is the seventh year that the report has been published.

Based on stations that are now Open-Retail or under development, this year’s analysis is the first to suggest that AB 8’s 100-station target might be met by the end of 2023. The network is expected to expand significantly until 2026, with more than 176 stations across California.

The outlook for 2021 and beyond has greatly improved thanks to new station awards issued by the California Energy Commission (CEC) and newly announced intentions for private building of more stations.

The first quarter of 2019 had nearly as many sales of fuel-cell electric cars (FCEVs) as the entire year.

However, more effort remains to guarantee that network development stays on track, FCEV deployments speed up, and future growth potential are achieved.

CARB believes hydrogen fuel and FCEVs have a lot of promise to help the state meet its rapid ZEV deployment and decarbonization goals, especially with the assurance offered by the most recent station construction plans.