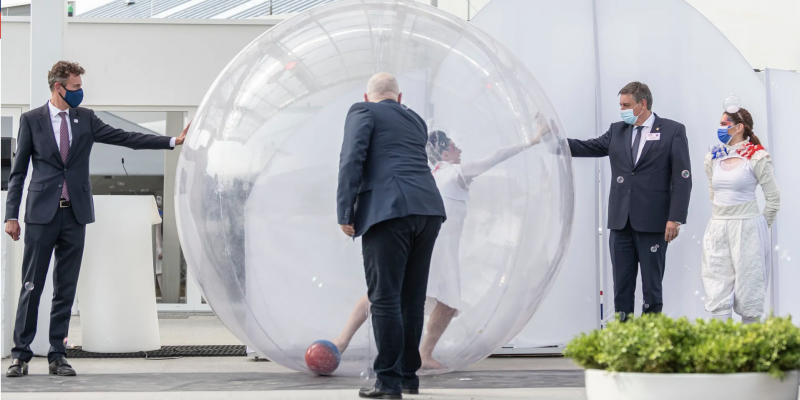 CMB.TECH is committed to developing hydrogen-based solutions for industrial and maritime applications. This commitment was bolstered by the launch of the Hydroville in 2017, the world’s first hydrogen-powered passenger ship. Until now, hydrogen has been delivered to Hydroville via a tube trailer (mobile hydrogen refuelling station). The Hydroville, as well as CMB.TECH’s other hydrogen applications, will now be able to refuel in Antwerp.

The hydrogen refueling station is being built at Antwerp’s Port House. CMB.TECH purposefully chose this location on the city-port border to be able to supply hydrogen to the port’s many industrial applications on the one hand, while keeping it easily accessible to the general public on the other.

In addition to the hydrogen refueling station, CMB.TECH is launching the world’s first dual-fuel hydrogen truck today. Dual fuel technology is feasible, affordable, and environmentally friendly, and it allows for the quick conversion of various applications.

The Lenoir truck is the catalyst for reducing emissions in the logistics industry. The symbolic name ‘Lenoir’ was given to this hydrogen truck in honor of Étienne Lenoir, a French-speaking Belgian who built the first internal combustion engine powered by hydrogen in 1860.

The electrolyser converts electricity and water (H2O) into hydrogen. This hydrogen is pumped to a very high pressure into various buffers via a compressor. These buffers make it possible for a car, truck, or ship to refuel. In addition to the refueling station, the site has two trailer docks where the environmentally produced hydrogen can be pumped to trailers that can supply hydrogen to CMB.TECH’s port applications. In addition, there are a number of ultra-quick charging stations for electric vehicles, which allow cars to be charged in under 15 minutes.

CMB.TECH is working with specialized partners such as Ekinetix, Ballast Nedam Industriebouw, Alpha Engineering, Maximator, and Cummins on the hydrogen refueling station.