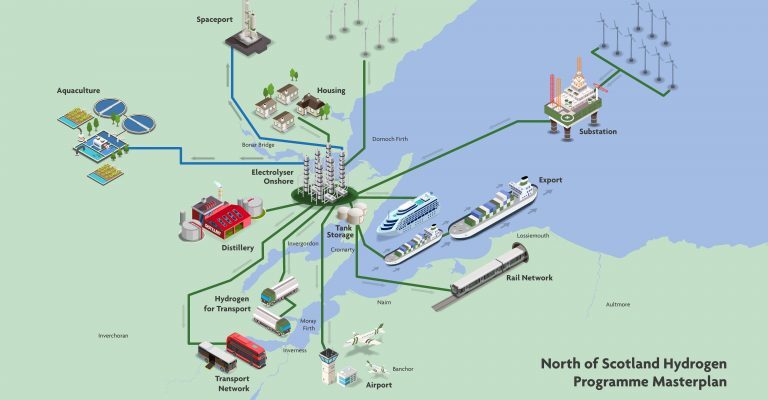 According to a feasibility study, the Cromarty Firth would be an ideal location for the UK’s largest green hydrogen electrolyser.

The North of Scotland Hydrogen Programme’s ‘Distilleries Project’ found a number of sites adjacent to the Firth that are suitable for a 35MW electrolyser facility capable of producing up to 14 tonnes of green hydrogen per day by 2024.

The project could be extended further to fulfill the growing need for green hydrogen in Scotland, the United Kingdom, and abroad. This zero-carbon fuel is a critical component of the Scottish Government’s decarbonisation strategy, as it would significantly contribute to the Scottish Government’s goals to become a leading hydrogen economy by 2030 and net-zero by 2045.

The study explored the potential of establishing a green hydrogen hub in the Cromarty Firth that would supply hydrogen to distilleries in the region at a competitive price, assisting distilleries in decarbonizing their heating and manufacturing operations.

ScottishPower, Pale Blue Dot (A Storegga Group Company), the Port of Cromarty Firth, and spirits giants Glenmorangie, Whyte & Mackay, and Diageo were among the partners.

According to the assessment, the Cromarty Firth’s suitability is enhanced by a high regional concentration of renewable energy potential, including future offshore wind development sites capable of supplying the electrolyser with the required volume of clean power.

Along with this huge offshore wind resource, the Cromarty Firth already had significant existing infrastructure, a track record of success in renewables, an established local supply chain, and extraordinarily strong connections to industry, transportation, and heat networks.

The study recognizes green hydrogen’s importance as a long-term, sustainable, and safe energy source for those unable to decarbonize their operations only through renewable power.

It proposes that the facility be developed in stages. The electrolyser would be installed in Phase 1 by 2024 to meet local and distillery demand and to demonstrate the technology at this scale. A second phase would see an increase in green hydrogen production to fulfill expanding energy demands on a national and international scale.

Following the successful completion of the feasibility study, the project will proceed to the next level of development, which will entail thorough engineering, community participation, and commercialization. By 2023, this will position the project for a final investment decision.

Bob Buskie, Chief Executive of the Port of Cromarty Firth, said: “This is fantastic news for both the Cromarty Firth and for the country’s ambitions to become a leading hydrogen nation, with targets for Scotland to generate 5GW of renewable and low-carbon hydrogen by 2030 – enough to power the equivalent of 1.8 million homes.

“Phase 1 of the electrolyser could be up and running, and the first hydrogen produced, by 2024 in what will be one of the biggest electrolysers in the UK. Such a facility will be a game changer not only for industries across the Highlands and Scotland, but also for the UK and internationally as we will be able to export green hydrogen to energy markets around the globe.”

Barry Carruthers, Hydrogen Director at ScottishPower, said: “This is an industry leading project, harnessing the region’s rich, renewable energy to help support industries and sectors near the Port of Cromarty Firth on their own decarbonisation journeys. The North of Scotland Hydrogen Programme will see the Highlands become home to one of the UK’s largest green hydrogen facilities and we’re looking forward to moving ahead with our partners, the Scottish Government, Highland Council and all local stakeholders as we move into the next stages of the project.

“Now, more than ever, we need to see more projects like this being developed across the country. We’re in a climate emergency and so we have to focus on zero emission technologies – green hydrogen offers the long-term, sustainable, zero emission solution for industries, sectors and businesses that cannot be supported by renewable electricity alone. With only months to go until COP26, one of the most important climate summits, we’re showing what can be achieved when industry collaborates in order to tackle climate change.”

Nick Cooper, Chief Executive of Storegga, said: “This study confirms that the Cromarty Firth region is well positioned to play a leading role in Scotland’s green hydrogen economy. The consortium has jointly delivered a feasibility assessment that demonstrates the viability of the Phase 1 green hydrogen production plant. The plant will be developed in phases to become one of Europe’s largest hydrogen electrolysers.”

Dr. Peter Nelson, Operations Director for the Glenmorangie Company, added “We have all learnt a huge amount from the feasibility study into the potential of hydrogen as an alternative fuel source and excitingly for us it is firmly rooted in, and relevant to, the particular needs and challenges we all face in the North of Scotland.

It is a great example of collaboration across different companies and sectors and we look forward to progressing discussions further.”

Keith Miller, Distillation & Maturation Director, Diageo, said “This was a great feasibility study to understand the potential of hydrogen in the Cromarty Firth area and we look forward to understanding the next steps.”

Shane Healy, Director, Production and Distilling at Whyte & Mackay concluded “Cromarty Firth is home to a thriving community and this project has been a catalyst to come together and share our vision for what the future of the local economy and community around it will be”