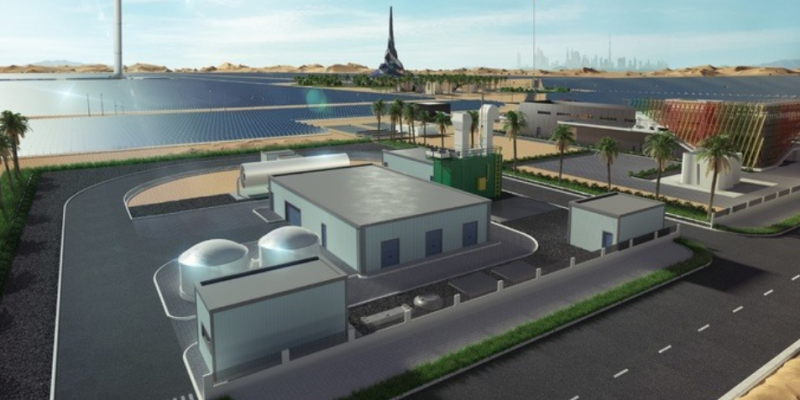 The Dubai Electricity and Water Authority will reveal its hydrogen strategy in 2022, as part of the UAE’s energy transformation efforts, which prioritizes investment in the clean fuel.

The utility is now collaborating with Siemens Energy of Germany on a Dh50 million hydrogen trial project.

“We weighed the benefits and drawbacks. However, the price is currently very favorable. We’re putting together terms of reference to bring the hydrogen plan forward, and it’ll probably take a year to finish, but I believe hydrogen will compete in the future “Dewa’s managing director, Saeed Al Tayer, stated.

The 300-kilowatt green hydrogen plant is being built at the Mohammed bin Rashid Al Maktoum Solar Park, which is also home to the UAE’s largest solar facility.

The Dewa, Expo 2020, and Siemens Energy pilot project intends to show how hydrogen can be created using solar power, as well as how to store and re-electrify the clean fuel.

Electrolysis, which can be fueled by energy from the sun, wind, or other renewable sources, is used to make green hydrogen.

Mr Al Tayer stated that Dewa is also researching the application of hydrogen in mobility, notably in public transit.

The UAE intends to offer hydrogen-powered transportation on a local level as part of a larger effort to investigate the fuel’s potential, which has become a key component of regional energy diversification strategies.

By 2050, Dubai, the country’s commerce centre, wants to get roughly three-quarters of its energy from renewable sources. As part of its 2030 green mobility program, the emirate is also increasing the usage of sustainable transportation.

Meanwhile, Masdar, Abu Dhabi’s renewable energy business, is working on a hydrogen demonstrator project as part of this partnership. By the end of the year, the project’s design should be completed.

The company has already started evaluating its green hydrogen demonstrator project, which will see fuel cells deployed in buses at Masdar City’s carbon-neutral Masdar City, as well as in aviation fuel for Etihad Airways and Lufthansa.

According to Fitch Solutions, the global hydrogen market is predicted to increase to $183 billion by 2023, up from $129 billion in 2017. Investments in hydrogen are expected to top $300 billion by 2030, according to Natixis, a French investment firm.

48 percent of Germans believe in hydrogen