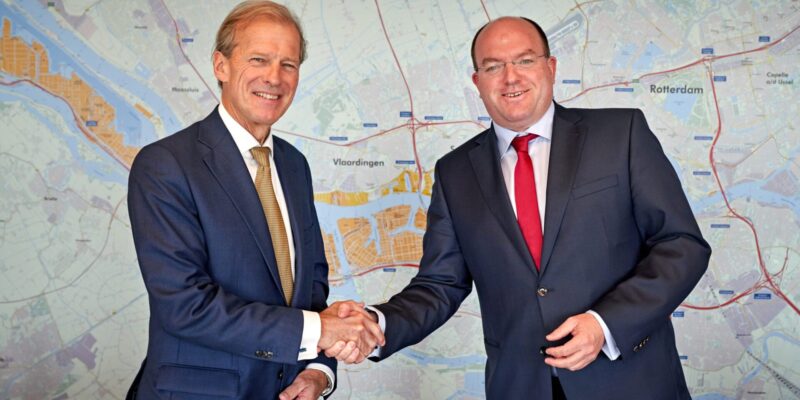 The port administrations of Duisburg and Rotterdam have signed a Letter of Intent (LOI) to renew and enhance existing 2020-dated cooperation agreements.

In addition to existing agreements concerning the efficiency of logistical linkages, the cooperation will be broadened to encompass efforts in the fields of digitalization and energy transition. Markus Bangen, CEO of duisport, and Allard Castelein, CEO of Port of Rotterdam, inked the deal.

duisport and the Port of Rotterdam have been longtime commercial partners. More than one million TEU of containers are traded annually between the two logistics centers, for instance. Nearly one-third of them are already transported by rail. The role provided by this sustainable method of transportation could be bolstered through digitization and data sharing. This LOI aims to create the world’s most digital and sustainable port-inland hub connection by integrating Duisburg’s “Rail Freight Data Hub” with Rotterdam’s “Rail Connected.”

The letter of intent also includes agreements to investigate the possibilities of integrating the port community systems Portbase (Rotterdam) and the RheinPorts Information System (Duisburg) and to learn from each other’s endeavors in digital twin projects. Regarding the energy transition, both ports intend to study the possibility of developing hydrogen hubs collaboratively. Rotterdam will be the “hydrogen gateway” to Europe in the future, while Duisburg will be the hub for Germany. Creating a physical connection between the two is hence the obvious solution.

‘We are facing major challenges that we will overcome together much faster, more efficiently and more intelligently’, says Markus Bangen. ‘Particularly in the areas of digitalization and the energy transition, it is important to work together and share our knowledge and expertise. I am therefore very pleased that we will continue the trusting partnership between the ports of Duisburg and Rotterdam.’