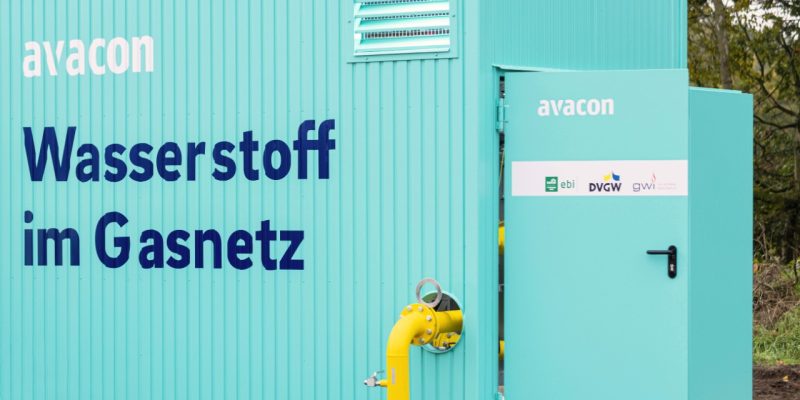 Avacon, an E.ON subsidiary, will begin injecting hydrogen to a sub-grid in Saxony-Anhalt in December.

In the coming heating season, up to 20% hydrogen will be gradually added to natural gas. The collaborative project of Avacon and the German Technical and Scientific Association for Gas and Water (DVGW) aims to show that it is technically viable to feed hydrogen into an existing gas network at a far higher proportion than previously foreseen in the DVGW’s technical guidelines. This procedure does not necessitate the modification of devices or systems. The project’s findings serve as a blueprint for future hydrogen utilization in gas distribution networks. Laboratory investigations demonstrate that many domestic appliances may operate with up to 30% hydrogen contamination. All appliances are evaluated using test gas that already contains 23 percent hydrogen as part of the approval procedure. The expertise obtained from their application in practice will be used to back up these laboratory results in the collaborative project.

“In our opinion, green hydrogen is indispensable on the way to a climate-neutral energy supply. With innovative projects like this one, we want to demonstrate that our grids can absorb green gas both efficiently and in relevant quantities. In this way, we are underlining the sustainable value of distribution grids as the key to a CO2-free energy supply,” says Avacon Chief Technology Officer Dr Stephan Tenge.

“Our joint project is an important milestone in the use of hydrogen as an essential component for a successful energy transition,” says Prof. Dr. Gerald Linke, Chairman of the Board of DVGW. “We are demonstrating in practice that the existing gas infrastructure, as well as the majority of applications, are fit for hydrogen and are an indispensable asset to lead Germany into a hydrogen economy and make it climate neutral.”

A part of Avacon’s gas distribution network in the Saxony-Anhalt district of Jerichower Land was chosen for the project. This is especially appropriate because the network infrastructure established there is indicative of the entire Avacon gas distribution network, and so the results are transferrable. The network portion is a medium-pressure distribution network with a pipeline length of approximately 35 kilometers, supplying natural gas to around 350 network customers. The selected network sector covers a wide range of appliance technologies with the matching number of gas appliances, which are mostly utilized for heat delivery.

In the first stage of the project, all gas appliances installed at customers were registered and tested for operational and safety features, as well as hydrogen compatibility, in collaboration with the “Gas- und Wärme-Institut Essen” (GWI) and gas appliance manufacturers. Almost all of the gas installations with gas appliances surveyed thus far have been scored positively. Only four inefficient appliances are being replaced by modern, hydrogen-compatible replacement appliances.

The technical planning and building of the hydrogen admixture plant were proceeding concurrently with the inspections of the installed technology. This is set to go into effect at the end of the year.

This will signal the start of the blending step in the project’s next phase. The injection of hydrogen is envisaged in stages of 10, 15, and 20% hydrogen admixture throughout the two heating periods 2021/22 and 2022/23. When the system is completed at the end of 2021, ten percent hydrogen will be added to the natural gas over a four-week period in the first stage, which is still within the DVGW limits. Random measurements of combustion quality are carried out in approximately one-third of the gas appliances, together with measurements of the actual hydrogen content on site, in order to scientifically accompany the feed-in at all feed-in stages.

The maximum hydrogen admixture is to be increased in five percent increments up to 20 percent. The 15 percent blending phase is scheduled to begin in the first quarter of 2022. Following an evaluation, a target concentration of 20% hydrogen is to be achieved at the end of the heating period. During the 2022/23 heating season, another 20% admixture step will take place over several weeks. In addition to blending as evenly as possible, volatile feed-ins are intended to imitate volatile renewable energies as hydrogen sources and to explore the consequences of variable hydrogen concentrations in the stock.

Green gases, in addition to renewable power, will become essential as a storage medium and energy carrier in all sectors in the future decades. As a result, E.ON is preparing the existing gas infrastructure to be H2-ready and aims to be a pioneer in the future hydrogen economy. E.ON is already well-positioned, with various initiatives ranging from decentralized hydrogen generation to grid integration and consumer supply.