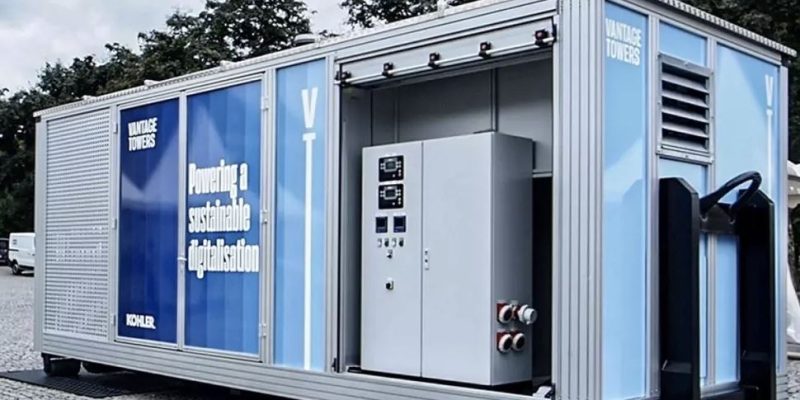 Gaseous hydrogen lasts for 72 hours in a tank after filling. According to a Vantage Towers spokeswoman, this fuels a 14 kW Toyota hydrogen combustion engine, which in turn generates electricity for the mobile phone tower. Hydrogen engines are more powerful and have a longer lifespan than other motor technologies like fuel cells.

The EnergyContainer, which is 6 meters long and 2.6 meters high, also has a photovoltaic system on its roof with solar-aligned panels. It may be used for up to three months when coupled with a 20 KW Toyota liquefied natural gas engine.

The mobile transmitter stations are designed for crisis situations with challenging access locations. Maintenance and supply runs shouldn’t add to the already heavy load on the infrastructure.

The first version of the EnergyContainer has been supplying a mobile transmission station in Obermoschel, Rhineland-Palatinate, for around two years, according to the Vantage spokeswoman. Additionally, the prior model was utilized in the Ahr Valley following the flood disaster to swiftly and dependably restore mobile phone service there. According to reports, the new EnergyContainer has already piqued the interest of many federal states and agencies.

A member of the Vodafone Group is Vantage Towers. The business runs over 80,000 radio towers across 10 different European nations. Since March 2021, the company’s shares have been traded on the stock exchange.

Ambitions of the Netherlands for hydrogen and green chemistry are accelerating