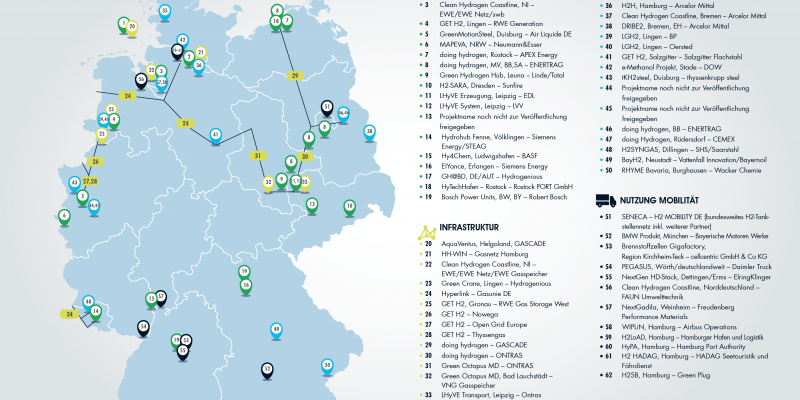 The 62 large-scale hydrogen projects were chosen from over 230 project proposals and represent the complete hydrogen market value chain.

The funding process’ goal is to aid in the realization of the National Hydrogen Strategy, while also taking into account EU goals in the areas of generation, infrastructure, and industrial and mobility applications. The IPCEI projects will get funding equal to 40% of the National Hydrogen Strategy’s aim of 5 gigawatts of electrolysis capacity by 2030.

The 62 projects will now participate in a selection process (matchmaking) at the European level in the second procedural stage after the selection has been made. Because the IPCEI projects will be incorporated in a transnational hydrogen value chain as European collaborative projects in the medium term, the goal is to find possible European project partners. Today, June 8th, the European matchmaking process begins. The projects are expected to be authorized by the European Commission under state aid law this year, according to the Federal Ministry of Economics. The first grant notifications are planned to be sent out in April 2022.

“Based on our considerable experience, we are in the early stages of using hydrogen technology in large-scale projects using an energy system approach, and we are pleased with the ministry’s decision,” said Dr. Gunar Herring, an ENERTRAG board member. “The decision to fund initiatives aimed at feeding green hydrogen into repurposed H 2 gas pipeline networks is a significant step toward establishing a European hydrogen infrastructure.”

The selected projects No. 8 and No. 46 are two applications that ENERTRAG and its project partner CEMEX filed as sub-projects of the joint project “doing hydrogen.” The two transmission system operators Gascade and ONTRAS started the cooperative project “doing hydrogen.” An East German hydrogen hub will be created in collaboration with other partners to connect H 2 projects in Mecklenburg-Western Pomerania, Brandenburg, Berlin, Saxony, and Saxony-Anhalt. The backbone of a H 2Network should be constructed quickly for this purpose, and the network should be filled with green hydrogen. ENERTRAG intends to construct a total of 210 MW of electrolysis capacity at four locations, as well as the requisite renewable generation capacity in the form of wind and photovoltaic systems.

In addition, ENERTRAG and CEMEX are planning the scale-up phase of the flagship project “Concrete Chemicals” (No. 47) at the Rüdersdorf cement factory, which will create 35,000 tons of green hydrocarbons per year. Green hydrogen (15,000 tons per year) received from the “doing hydrogen” hydrogen pipeline is used to transform CO 2 (100,000 tons per year) extracted from cement production into high-grade eCrude (green hydrocarbons with naphtha quality) in new synthetic reactors. At the Rüdersdorf plant, these procedures boost efficiency, reduce CO 2 emissions, and produce alternative fuels.

“The ideal energy store for renewable energy is hydrogen, and it can be used considerably more efficiently than coal, oil, or natural gas,” says ENERTRAG CEO Jörg Müller. “The initiatives chosen by the Federal Ministry of Economics have the potential to be watershed moments on the road to climate neutrality. What’s essential here is the direct, simultaneous linking of hydrogen generation with wind and solar electricity, which eliminates renewables’ natural oscillations.

ENERTRAG is also an associated partner of the GET H2 initiative, with intentions to put up a green hydrogen electrolysis system and feed it into the GET H2 partners’ planned hydrogen network, which will be funded as an IPCEI project. The GET H2 partners’ initiative, which is also an IPCEI initiative, combines green hydrogen generation and transportation with industrial customers in Lower Saxony and North Rhine-Westphalia. Simultaneously, a connection to the hydrogen network in the Netherlands will be established, as well as the first hydrogen storage facility.