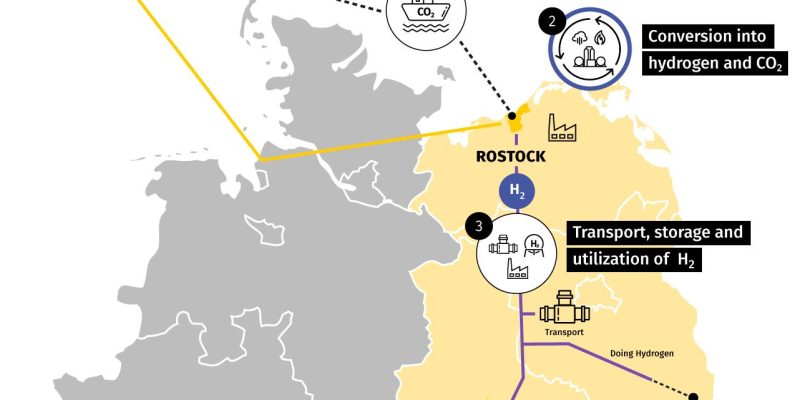 Equinor, a diversified energy business from Norway, and VNG AG, a German gas firm, have decided to expand their existing cooperation in natural gas into the new fields of low-carbon hydrogen and ammonia, as well as carbon collection, use, and offshore storage of CO2 (CCU and CCS).

The partners have also agreed to launch a cooperative initiative to assess the feasibility of creating low-carbon hydrogen on the Baltic Sea coast, notably in Rostock, utilizing technologies to gather, consume, transport, and safely store CO2 offshore on an industrial scale. This extended relationship between Equinor and VNG should also be considered in the context of the continued strengthening and expansion of the 45-year-old German–Norwegian energy alliance, which is endorsed by the leaders of both nations.

The project will serve as a catalyst for:

The partners concur that hydrogen derived from decarbonized natural gas will play a significant role in the development and expansion of the German hydrogen market. The production of hydrogen with low levels of carbon dioxide in Germany and the management of carbon dioxide create prospects for economic growth.

Irene Rummelhoff, EVP Marketing, Midstream and Processing, Equinor:
“We are pleased to be expanding our long-lasting partnership with VNG into developing the German market for low-carbon hydrogen and carbon management solutions in support of the German energy transition. VNG and Equinor have complementary skills, strengths and positions which are decisive for the success of the project.”

Ulf Heitmüller, CEO of VNG AG:
“We are very happy to take the next step towards a secure and climate friendly energy system with our long-standing partner Equinor. We need industrial scale solutions in hydrogen and carbon management. By jointly developing the market for natural gas in Eastern Germany in the 1990-ies the partners already made a significant contribution to the reduction of CO2 emissions and the improvement of air quality moving away from traditional lignite heating systems to natural gas. Now we are taking another significant step ahead with hydrogen and carbon management.”