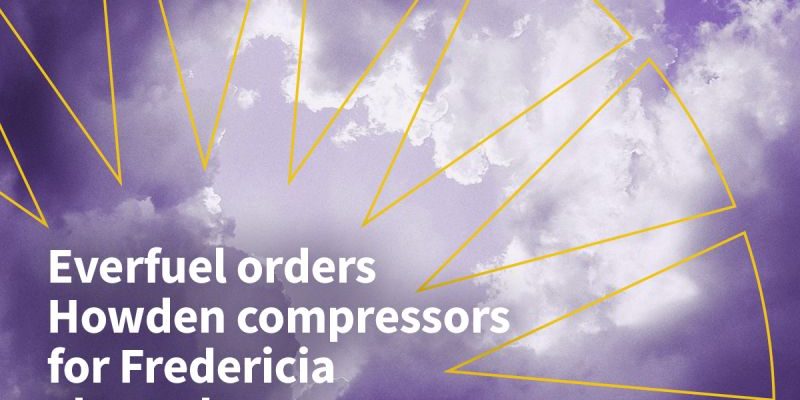 Howden has been selected to deliver a hydrogen compression solution for Everfuel’s green hydrogen production facility under development adjacent to the Fredericia refinery in Denmark.

Hydrogen compression is the second-most critical component of the 20 MW hydrogen HySynergy facility under development at Fredericia after the alkaline electrolyser, which is supplied by NEL.

The compression solution is scheduled to be delivered in early 2022 and the contract value is just below €2 million.

“This is the second major contract we have awarded to develop our own green hydrogen production at the HySynergy electrolyser. We have worked closely with Howden and Nelto optimize plant design and ensure we integrate and utilize the compressors in the most cost-efficient manner, and thereby reducing the total cost of the electrolyser installation.”

“This cooperation with Everfuel demonstrates Howden’s capabilities in developing and delivering technology solutions to support our customers’ vital processes which in turn contribute to a more sustainable world. Through close cooperation with Everfuel and NEL, who are innovators in the development of green hydrogen infrastructure, we provided a compression solution which seamlessly integrated into Everfuel’s hydrogen production infrastructure, helping to provide a competitive and sustainable alternative to other more carbon intensive energy sources. “

The facility setup is non-contaminating and has redundancy, meaning that the electrolyser facility will be able to operate on partial load, even if one compressor is out for maintenance.

When fully operational in mid-2022, the Fredericia facility will have a production capacity up to 8 tons per day of green hydrogen, made from renewable wind power, with 10 tons of storage capacity. Everfuel is responsible for the EPCwork (engineering, procurement and construction), including storage and distribution facilities.

“We have an experienced Everfuel team working on optimizing the facility layout. The close cooperation with Howden to improve the total electrolyser installation confirms the additional value we can generate by assuming EPC responsibility. Howden and Everfuel intend to make this solution a standard offering for 20MW installations with low pressure electrolysers, and we are exploring the possibility of expanding the cooperation to potentially include up to 100MW electrolyser solutions as well, which would fit well with the three units we are considering for the planned Phase II development at HySynergy.”

Everfuel’s total investment for developing the Fredericia facility is estimated at around €20 million, which is approximately 50% financed by public Danish and EU funding programs.

Everfuel has a 10 year offtake agreement with the Fredericia refinery for base load hydrogen offtake for use in the refinery process. The remaining hydrogen will be utilized in Everfuel’s expanding distribution and fueling network.