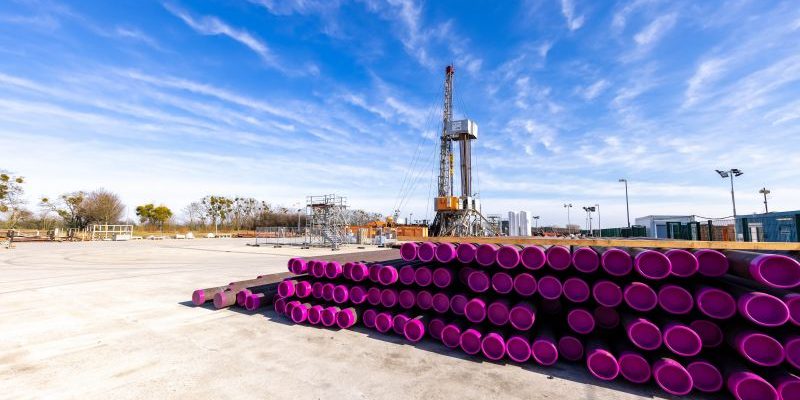 With the installation and cementing of 160 steel pipes down to a depth of 1,000 meters, the energy service provider EWE has laid the foundation for the planned small test cavern to be built in the salt dome

EWE wants to test the safe storage of 100 percent hydrogen in the underground cavity that is being created.

“With the research project, we are taking on a pioneering role in Europe. This would mean that large quantities of green hydrogen generated from renewable energies could be stored and used as needed, and would become an indispensable component in order to achieve set climate targets.”

Before large-scale hydrogen storage is possible, EWE wants to prove that the gas can be safely stored in cavities underground. The company installed a pipe-in-pipe system for this purpose.

“We put a small and a large steel pipe into one another, a so-called double pipe tour. These tests are especially important for future, long-term applications. In the case of large-scale hydrogen storage, we have to prove to the responsible authorities that hydrogen is compatible with the materials used and that it is safe in the long term.”

In order to be able to use the inner tube for the material tests, EWE has developed a flexible system together with its service provider UGS from Mittenwalde. This is used to dismantle the inner tube and use it for tests without destroying the material.

“For the extraction of the test cavern, we first set up the surface technology. We want to start rinsing out the rock salt in autumn. Our cavern will have a volume of 500 cubic meters. A single-family house fits in there. In the dimension of the salt dome, it’s tiny, a little cherry in a huge tree, so to speak. We will use 4,000 cubic meters of fresh water to brine our cavern over a period of three months. We pump the salt water produced during the brine process through an existing underground pipeline to our sinking station in Heckelberg. There the brine is channeled into sandstone formations 1,000 meters deep, in which there is naturally salt water.”

The rock salt layer under the storage area begins at a depth of around 600 meters and extends up to 3,200 meters below the surface of the earth. The salt comes from a sea that existed in Rüdersdorf 150 million years ago.

In Rüdersdorf, EWE has built two of its 37 natural gas caverns in the salt rock. The company has been securely storing natural gas in it since 2007. The drilling for a further cavern was already in place. EWE is now using this to build the hydrogen test cavern.

“As part of the research project, we particularly hope to gain knowledge of the degree of purity of the hydrogen from the cavern if it has been stored in the cavern for a while.”

This criterion is particularly important for the use of hydrogen in the mobility sector. Overall, the development of a hydrogen economy is an absolutely necessary step towards a sustainable and climate-friendly energy system.

EWE is cooperating with the German Aerospace Center (DLR) on the project called HyCAVmobil. The DLR Institute for Networked Energy Systems examines, among other things, the quality of the hydrogen after it has been extracted from the cavern and the materials used. The investment volume amounts to around ten million euros – four million of which are EWE’s own funds. EWE and DLR will receive the remaining sum as part of the National Innovation Program for Hydrogen and Fuel Cell Technology as funding from the Federal Ministry of Transport and Digital Infrastructure.

EWE intends to use the knowledge that the small research cavern provides in order to use underground caverns with 1,000 times the volume for large-scale hydrogen storage in the future.

“For economic operation, especially for the phase of market ramp-up, we need to subsidize retrofitting costs, for which we are politically committed. After all, with 37 salt caverns, we have over 15 percent of all German cavern storage facilities that could be suitable for storing hydrogen in the future and would therefore be an important basis for achieving climate targets.”