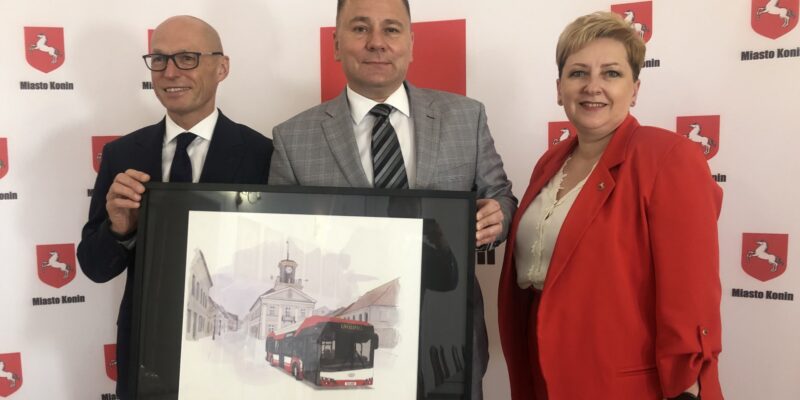 MZK Konin will be the first public transport operator in Poland with a hydrogen bus in its fleet.

President Magdalena Przybyła, in the presence of the Mayor of the City, Piotr Korytkowski, has signed a contract with Solaris Bus & Coach sp.z o.o., for the supply in the form of a lease of one brand new low-floor hydrogen-powered bus.

The supplier, the company Solaris Bus & Coach from Greater Poland, was selected through a tender. Miejski Zakład Komunikacji in Konin sp.z o.o. will lease a hydrogen-powered bus for a four-year period. According to the contract, the vehicle will be delivered within 12 months. Thus, the Solaris Urbino 12 hydrogen bus found its first recipient in the vicinity of Poland.

“The modernization of the bus fleet of the Municipal Communication Plant in Konin is the direction chosen by the City of Konin. When announcing its modernization, I was thinking mainly about hybrid and electric buses. The fact that today we are signing a contract for the lease of the Solaris hydrogen bus is a source of pride and great joy for me. The most modern solutions in the field of public transport in the world will go to Konin. I believe that this is just the beginning, said the Mayor of Konin, Piotr Korytkowski.

“Let us undertake this task with great shyness, but with great conviction that this is the way to be followed anyway. We know that thanks to the cooperation with Solaris and with the support of the city authorities, we can do it, ”declares Magdalena Przybyła, President of the Board of the Municipal Communication Plant in Konin.

“It will be the first hydrogen bus in Poland. We are signing a contract for something that is innovative and which has started to develop intensively in Europe, and I am all the more glad that it is happening in Greater Poland, in my home region. ” – said Dariusz Michalak, Vice President of the Management Board for R&D and Production, who signed the contract on behalf of Solaris.

“We are witnessing an extraordinary moment. Not so long ago, our company introduced the first electric buses to the Polish market, but today we sign the first contract for the delivery of a hydrogen-powered bus to Konin. We have declared more than once that we are a precursor of changes in public transport in Poland – today is a perfect seal. Hydrogen has a chance to become one of the pillars of the transformation of public transport in Poland and throughout Europe, ”said Javier Calleja, President of the Management Board of Solaris Bus & Coach.

Among the main advantages of a hydrogen bus, it is worth mentioning the short time of refueling the vehicle, a very long range and a zero-emission, quiet and city-friendly operation mode. Hydrogen is an absolutely clean energy source. The only by-products of the chemical reaction that takes place in the hydrogen cell are heat and water vapor. The hydrogen will be stored in gaseous form in tanks located on the roof. The ordered bus will also be equipped with an additional electricity storage – a Solaris High Power battery.

It is worth recalling that at the end of January this year we had the opportunity to test the Solaris hydrogen bus in Konin. We were then able to see the advantages of this highly technically advanced vehicle.

With the delivery of a new bus to Konin, Poland will join the elite group of countries that have benefited from Solaris’ hydrogen offer, and Konin will become a Polish pioneer in the use of hydrogen energy in urban transport.