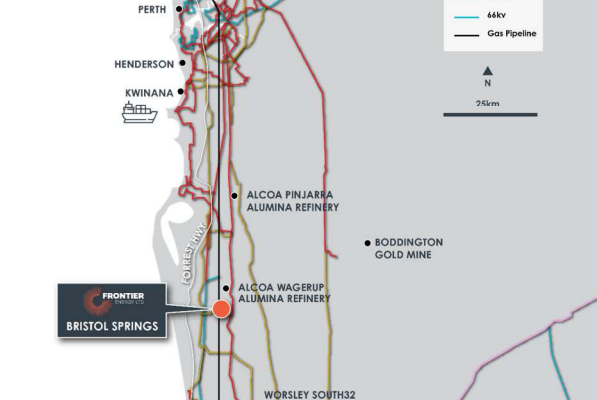 The first findings of Frontier Energy’s green hydrogen study show that the business might begin producing the fuel at its Bristol Springs solar plant “much earlier” than initially anticipated.

Frontier Energy stated that it was made possible by Bristol Springs’ “unique position” in Waroona in the south-west of Western Australia.

The project is already well-advanced and has secured approval for development.

Initially, we thought that this would be larger than the phase one project (114MWdc) in order to justify the increased capital expenses involved with hydrogen generation.

Mr. Young noted, “Because the Bristol Springs project is located in close proximity to important existing infrastructure for the hydrogen industry, our initial capital expenses for first production will be much less than for more remote ventures.”

He also emphasized the project’s proximity to potential early consumers of hydrogen energy, including users of the Dampier Bunbury gas pipeline and the diesel-reliant long-distance transportation industry.

The shift from diesel to hydrogen in Washington is supported by the federal and state governments.

In its budget for 2022-2023, the Australian government has earmarked $1.3 billion for energy security spending, which includes investments in hydrogen.

Mr. Young stated at the recent World Hydrogen Conference in Rotterdam that it was evident that the worldwide market for green hydrogen is “rapidly expanding.”

“It is evident that hydrogen fuel cell electric vehicles, which have existed since the 1960s, will play a significant role in global decarbonization, particularly in the long- and heavy-haul transportation business.”

In the long-distance transportation industry, hydrogen is already an economically viable alternative given fuel price projections, he continued.

The renewable growth and green hydrogen studies of Frontier Energy are anticipated to be published “in the future months.”