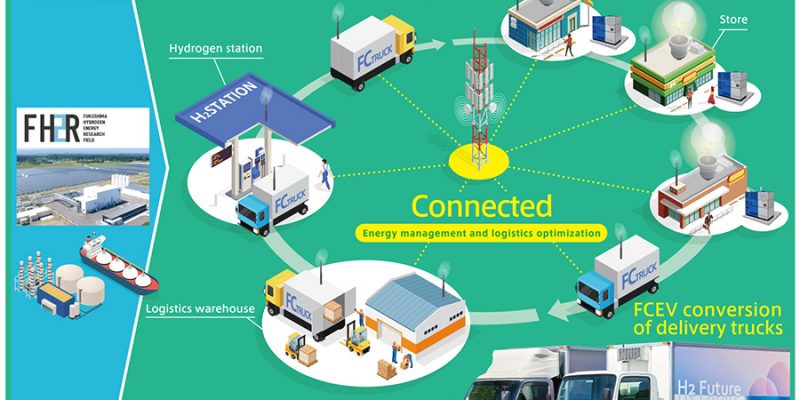 To aid in the recovery process, Fukushima Prefecture is focusing on hydrogen, a new form of energy, and has pledged to build one of the first hydrogen society models.

Isuzu, Hino, and Toyota all want to achieve carbon neutrality and want to contribute to the construction of a new city of the future in Fukushima through their three-company partnership; as a result, Fukushima Prefecture, Toyota, and their partners will develop an implementation model for hydrogen-based deliveries at supermarkets and convenience stores, which serve as both essential urban infrastructural and social infrastructure.

They’ll start by developing an implementation model for a 300,000-person city before taking on a challenge to apply the model to similar-sized cities across the country.

The implementation model will use hydrogen produced at multiple locations throughout the prefecture, including the Fukushima Hydrogen Energy Research Field (FH2R), introduce several fuel cell (FC) trucks for deliveries, use connected technologies to optimize operational management and hydrogen refilling schedules, and carry out energy management that is tailored to the local conditions.

In addition, in response to the needs and issues faced by Namie Town, where FH2R is located, and other prefectural regions, Fukushima Prefecture, Toyota, and their partners will operate FC kitchen and medical cars, as well as use hydrogen at stores and plants in Fukushima Prefecture to reduce supply chain carbon emissions.

Following Japan’s announcement of its 2050 Carbon Neutral Goal, there is a growing demand for concrete initiatives aimed at creating sustainable societies that can be passed down to future generations. This conviction is shared by Fukushima Prefecture, Toyota, and their partners; to that end, they intend to steadily promote the realization of one of the world’s first hydrogen societies, as well as carbon neutrality, by expanding their spheres of cooperation and taking advantage of Fukushima Prefecture’s diverse regional characteristics.