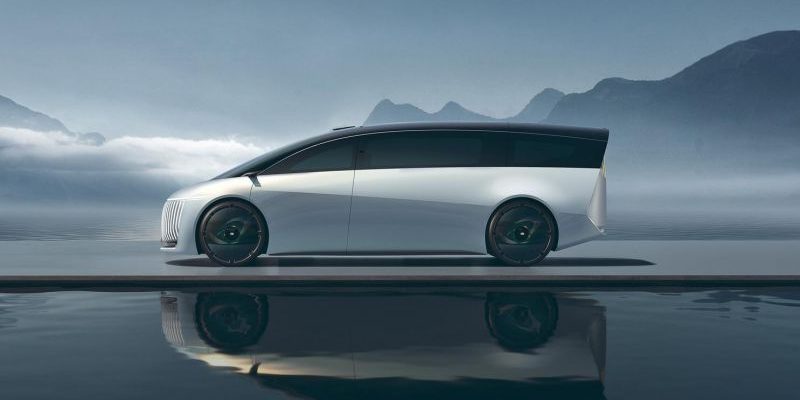 GAC separately unveiled a 1.5-liter hydrogen-fueled internal combustion engine at the ceremony, which is said to consume 0.84kg of hydrogen every 100 kilometers.

Great Wall Motor is said to be launching a new brand of hydrogen fuel-cell electric automobiles in China.

The Space has a sweeping appearance, with a front that is steeply raked, short overhangs, and a body that suddenly terminates in a Kammback tail that is almost hexagonal in shape when viewed from behind.

Similar to previous Chinese people-movers such as the Voyah Dreamer and Maxus G90, this GAC Space concept boasts a massive, nearly full-width grille up front.

However, the vertical grille pieces of the Space can be lit, and its wheel caps can display a light show.

There is only one door on the right side for back passengers, which opens like a gull-wing door.

The top is also reported to be “influenced by old Chinese design,” and a disc-shaped item in the front is supposed to be a radar or sensor for the Level 4 autonomous driving system.

This level of autonomy denotes that the vehicle is capable of operating under all road conditions for which it was built.

The tailgate is split in half and opens like a clamshell to reveal a lounge seat for two that is sheltered from the weather by the upper portion.

These two front chairs may rotate to face the rear occupants, who are seated in a curved booth seat. Additionally, there is a little coffee table in the center of the floor.

The gull-wing door panel is decorated with mountain and river imagery inspired by the Baiyun Mountain and Pearl River, which are well-known sights in the Guangzhou area.

This GAC people mover concept car is not expected to enter production in the near future, but its design and technologies will undoubtedly influence the Chinese automaker’s future production vehicles.

Guangzhou Automobile Corporation (GAC) Group was started in 1954 as a bus manufacturer and now includes a variety of spin-off brands, including the all-electric GAC Aion brand.

In China, GAC Group also produces automobiles under the Trumpchi brand and has joint ventures with Honda, Toyota, Jeep, and Mitsubishi, among others.