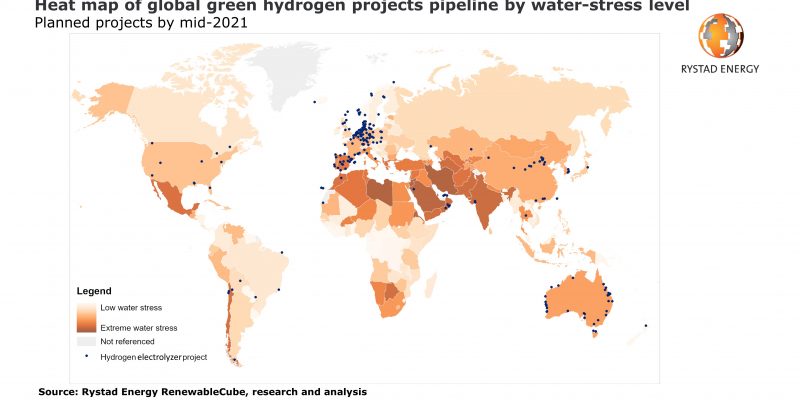 The global pipeline for green hydrogen projects is rapidly expanding, with an established electrolyzer capacity target of 206 gigawatts (GW) by 2040.

However, according to a Rystad Energy report, the majority of the proposed projects would be built in places where water is scarce. This means that a new desalination market will be needed to provide the majority of the 620 million cubic meters of water required by these projects.

Desalination capability is being added and improved in hydrogen projects, but many desalination systems will need to be external – and for the hydrogen to be “green,” they would need to be fed by extra clean, renewable electricity.

By 2040, the current pipeline of projects intends to create over 30 million tonnes of hydrogen per year, with a 620 million cubic meters of purified water required per year. More than 70% of these hydrogen electrolyzer projects will be built in water-stressed countries like Spain and Chile, and almost 85% of the hydrogen capacity planned for 2040 may require desalination as a source of water.

“Using water to create clean hydrogen will be a critical component of the energy transition, but the majority of the world’s planned green hydrogen projects will be situated in water-stressed areas. This necessitates development in the desalination industry, as well as more renewable energy to fuel it, resulting in higher costs for developers – but also possibilities for providers, according to Minh Khoi Le, a renewable energy analyst at Rystad Energy.

Australia, Western Europe, Central Asia, West Africa, and the Middle East presently rank first through fifth in terms of anticipated green hydrogen capacity. According to peer-reviewed data from the World Resource Institute, all of these regions, with the exception of Western Europe, have medium or higher levels of water stress, indicating that demand for fresh water is beginning to endanger supply capacity. Outside of these five locations, there are many hydrogen electrolyzer projects in nations with high levels of water stress – Spain and Chile, for example, are among the countries with the greatest levels of water stress and have a combined 42 projects planned, with more on the way.

If all hydrogen projects in locations with water stress levels above medium are completed, demand for desalination may increase fivefold to 526 million cubic meters by 2040. Heavy hitters in the green hydrogen pipeline will be included, such as projects in Australia (e.g., TotalEnergies’ HyEnergy 5 GW electrolyzer) and Germany (e.g., TotalEnergies’ HyEnergy 5 GW electrolyzer) (e.g. Aquaventus at 10 GW by 2035). The United Nations (UN) predicts that worldwide freshwater consumption will rise by 60% by 2025, primarily due to agriculture. As a result, locations with high levels of water stress will almost certainly need to build this additional desalination capacity to support green hydrogen plants.

While there are just a few projects in low-water-stress areas, many of them are near shore and/or use offshore wind as a source of energy (for instance in Western Europe and Brazil). By 2040, total desalinated water consumption for green hydrogen would reach 620 million cubic meters if all of these projects include saltwater desalination.

Some desalination projects, such as the Al Khafji and Yanbu 4 seawater reverse osmosis plants in Saudi Arabia, use solar PV on a lesser scale. Reverse osmosis desalination machines are now included in certain commercial electrolyzer systems.

Liquid hydrogen to be used in space