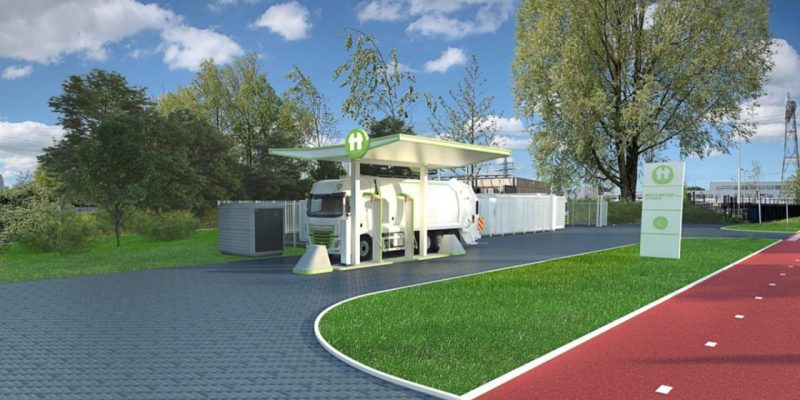 On the energy-neutral Century Autogroep Campus on the Bornholmstraat in Groningen, work on a hydrogen filling station has begun.

Holthausen Clean Technology and Century Autogroep, two local Groningen enterprises, have been collaborating for years to make emission-free mobility a reality. Electric Volkswagen delivery trucks are being converted to hydrogen as part of the current collaboration. Carl Holthausen and Erik Meems, two entrepreneurs, will start building the first public hydrogen filling station with green hydrogen at the end of August this year.

Energy Points, a subsidiary of Holthausen Clean Technology, is constructing a modern hydrogen filling station with a new design on Bornholmstraat, just across from the Roossien Hoogwerktechniek building. Green hydrogen production and refueling are both enabled, which is unique. Green hydrogen is the most environmentally friendly form of hydrogen, as it is produced using renewable energy sources such as sun and wind. Century Autogroep and Holthausen Clean Technology’s objective to make mobility more sustainable and contribute to the energy transition is perfectly aligned with the construction and realization of the hydrogen filling station. The hydrogen fueling station is scheduled to open in November of this year. The public hydrogen filling station will be operational every day of the week, 24 hours a day.