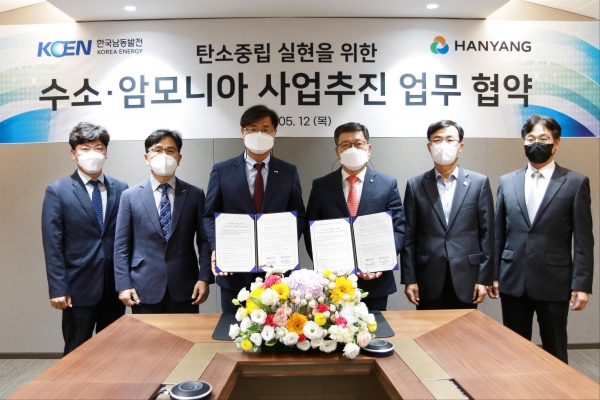 The ‘Yeosu Myodo Eco-Energy Hub’ will include a carbon-neutral energy cluster such as a hydrogen/ammonia terminal and a CCUS (carbon capture/use/storage/export) terminal, as well as an LNG terminal and a natural gas power plant. In particular, a hub for new global energy businesses such as green energy business, LNG exchange, and data center will be created.

In the carbon-neutral energy cluster, a hydrogen terminal, including port facilities, to import, store, and supply green and blue hydrogen and ammonia, and a CCUS terminal for collecting and liquefying CO2 from the Yeosu Industrial Complex and carrying it out or recycling is planned.

The core of the green energy business is the Northeast Asian LNG Hub Terminal, which is being promoted by Hanyang.

As the first phase of the project, the facility construction plan for 4 storage tanks with a scale of 200,000 ㎘ has been approved, and construction is currently underway, with a total of 12 storage tanks planned to be built by 2030. In addition, if a power generation complex using natural gas and hydrogen fuel cell power generation facilities is built, it is expected that it will become a mecca for green energy production in Jeollanam-do.

It will also build a data center for global LNG trading and financial data processing by attracting LNG exchanges through the global energy new business hub creation project. It is expected to contribute to the stabilization of LNG prices by developing LNG price indicators through the LNG exchange.

In addition, it plans to promote related businesses such as a refrigeration warehouse business, an air separation plant, and a waste plastic recycling business.

The ‘Yeosu Myodo Eco-Energy Hub’ project is a large-scale project with a total project cost of about 15.5 trillion won by 2030. If the project is successfully completed, it is expected to generate 143,000 jobs and 31 trillion won in production.