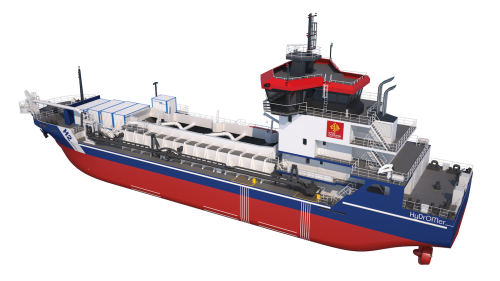 The double envelope enclosure used by the maritime fuel cell technology allows it to function flawlessly in a salty environment. The FC-RACK Marine from HELION may be mounted within the vessel or on the deck thanks to the thermal management system, specific onboard control system, and hydrogen safety system that it features. Finally, its vertical form makes maintenance activities easier to access.

Based on a simple and modular design that can be customized to meet client demands, HELION created its industry-standard fuel cell system, the FC RACK. With a wide range of power from 100 kW to several megawatts and a focus on high power applications, it can serve both fixed and heavy mobility industries.

The Occitanie Region previously placed an order for a hybrid hydrogen dredger, which will be constructed by the PIRIOU shipyard and created in cooperation with LMG MARIN, as part of the modernization of its fleet of boats.

The fuel cell system on this first hybrid hydrogen dredger, which has a 200 kW rating for maritime use, will provide all of the energy required for port operations and crew changes.

HELION was purchased by Alstom in April 2021. Alstom has invested around €6 million to increase the Aix-en-Provence plant’s output capacity while lowering production costs.