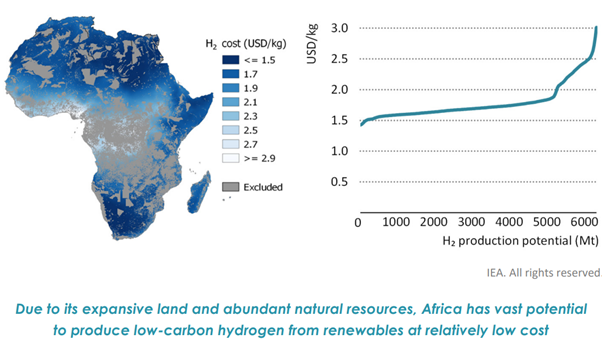 A new analysis suggests that Africa may provide the entire globe with affordable, low-carbon energy in the form of hydrogen.

In its Africa Energy Outlook 2022, the International Energy Agency (IEA) asserts that Africa’s abundant renewable resources — especially solar energy, but also onshore wind — are the key to realizing this potential.

According to the IEA, Africa could create 5,000 megatonnes of hydrogen annually for less than $2 per kilogram, which is equivalent to “world total energy supply”

Is hydrogen a viable alternative?

The U.S. Energy Information Administration states that hydrogen is an abundant and energy-dense gas that exists naturally in water and fossil fuels such as natural gas, coal, and petroleum. It is possible to use hydrogen as a fuel by isolating it from these sources.

When renewable energy, such as solar or wind, is utilized to separate hydrogen from oxygen in water molecules, the resulting hydrogen is referred to as “green hydrogen”

When hydrogen is used as a fuel, only water is produced as a byproduct. This makes it preferable to the combustion of fossil fuels, which contribute to global warming by emitting carbon dioxide and air pollution.

According to the IEA, Africa has one of the largest potentials for manufacturing hydrogen from low-cost renewable electricity. Africa contains 60% of the world’s finest solar resources, but only 1% of the world’s solar generation capacity.

Wind energy is another important resource. According to the IEA, dry and semiarid regions are perfect for wind and solar power, particularly in North Africa, the Horn of Africa, and Southern Africa.

According to the IEA, by 2030, Africa will be able to generate 80 percent of its required new electricity from solar, wind, hydropower, geothermal, and other renewable sources.

It is anticipated that the declining cost of solar units and hydrogen production would improve Africa’s hydrogen potential. According to the IEA’s calculation, this results in Africa’s $2 per kilogram hydrogen costing as little as half as much as hydrogen from the rest of the globe.

About 600 million individuals, or 43% of Africa’s population, lack access to electricity. This population is concentrated in sub-Saharan Africa. The IEA’s Sustainable Africa Scenario anticipates that by 2030, countries such as Ghana, Kenya, and Rwanda will have achieved full access.

It is stated that this is largely accomplished via extending national grids. In rural areas, where the majority of people without electricity reside, solar mini-grids and stand-alone systems are the most practical solutions.

To achieve universal access to inexpensive power by 2030, the IEA estimates that Africa will need to connect 90 million people annually. This is a threefold increase from recent years.

Hydrogen is considered one of the solutions.

How is hydrogen now utilized in Africa?

In the industrial sector, hydrogen is used to produce fertilizer derived from ammonia, a major agricultural nutrient, and to refine oil in North Africa and Nigeria. According to the IEA, this hydrogen is primarily extracted from natural gas and coal and is not low-carbon.

In contrast, the IEA’s projection of future energy use in Africa predicts “rapid expansion in the production and domestic use of low-carbon hydrogen” as a result of significant policy backing and infrastructural investment.

This results in “considerable potential” for exports to demand hubs in Europe by 2030.

In Egypt, Mauritania, Morocco, Namibia, and South Africa, a number of low-carbon hydrogen projects are already underway or under negotiation, according to the International Energy Agency.

LOTTE, Sumitomo of Americas, and Syzygy Plasmonics to partner on photocatalytic ammonia cracking