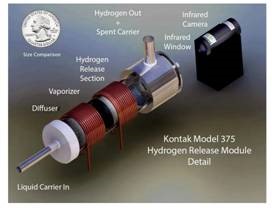 Kontak’s method is capable of efficiently releasing hydrogen from a dozen known carrier molecules. Anhydrous ammonia has the highest storage capacity of the carriers, with 17.3 percent hydrogen by weight held in liquid form, similar to propane.

Ammonia (NH3) molecules are composed of one nitrogen atom and three hydrogen atoms. NH3 is a very promising and environmentally acceptable fuel source because it contains no carbon, 1.5 times the amount of hydrogen found in liquid hydrogen (H2), and has the potential to significantly cut world GHG emissions.

Because hydrogen is stored in ammonia, the fuel’s weight decreases as it is consumed, making it ideal for commuter, eVTOL, drone, and conventional aircraft travel of up to 5,000 kilometers, as well as marine, transport truck, agricultural and industrial engine, and power production applications.

The unique reactor developed by Kontak is the most successful technique of hydrogen release to date. Hydrogen is purified and delivered straight to a fuel cell or internal combustion engine. The technique was created by a grant from the National Science Foundation. The Hydrogen Release Module is a USPTO patent #10,207,241B2 with many foreign patents pending.

Additionally, Kontak has filed patents for a low-cost combined hydrogen, ammonia, and battery energy station technology that has the potential to store up to three times the energy of conventional systems.