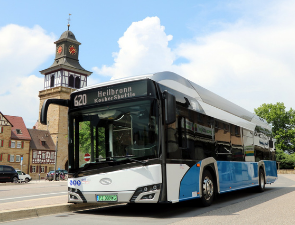 Solaris unveiled the Urbino 12 hydrogen, a hydrogen-powered bus, at Neuenstadt am Kocher, Germany.

It is a chance for the operator (Omnibus-Verkehr Ruoff GmbH (OVR)), which is a subsidiary of the Transdev Group, to become a pioneer in the Heilbron region for zero-emission public transport. Hydrogen will be produced sustainably as part of the “H2 Impulse” initiative and then used as a zero-emission fuel for urban buses. The regional component of the initiative is critical: hydrogen is created using wind energy at the nearby German Aviation and Space Hub (DLR). Following that, it is either used locally or relayed to regional users, such as those in Neuenstadt. As a result, the environmental balance of harmful emissions from production to end usage is nearly zero.

Solaris presented an innovative bus, the Urbino 12 hydrogen, to project participants representing the Heilbronn County, the city of Neustadt am Kocher, the municipalities of Hardthausen and Langenbrettach, and the Wirtschaftsfördergesellschaft Raum Heilbronn at the invitation of OVR (WfG, an industrial development agency operating in the Heilbronn region). Solaris is an example of a car that successfully incorporates hydrogen technology. To demonstrate hydrogen’s reliability and use in everyday transportation, the hydrogen bus operated the “KocherShuttle” express line between Neuenstadt and Heilbronn.

In the Urbino 12, a hydrogen fuel cell functions as a micro-power plant, producing energy and directly fueling the car. It’s a zero-emission bus; the only byproducts of the chemical reaction in the cell are water and heat, thus a cleaner mode of transport would be difficult to discover.

Since its launch in 2019, European operators devoted to urban transportation change have indicated strong interest in the Solaris hydrogen bus. According to market predictions, hydrogen-fueled buses will account for a significant portion of Europe’s bus fleet by 2030. The producer’s order book reflects this trend as well – operators from Germany, Austria, the Netherlands, and Sweden have already purchased over 80 Urbino hydrogen buses.