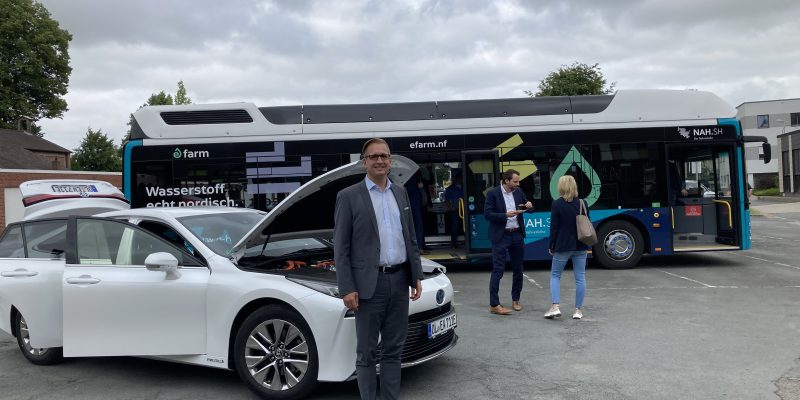 On Thursday evening, everything revolved around hydrogen mobility in Brake. Together with the organizer EWE, the district of Wesermarsch invited experts to a hydrogen day in and around the district hall.

The Hydrogen Day with around 40 expert participants is part of a roadshow through the northwest, on which the energy service provider EWE and vehicle manufacturers inform about possible applications of the green gas.

The focus of various presentations was on hydrogen mobility with the corresponding infrastructure and the applications in load and individual transport as well as in public transport. “Hydrogen-powered public buses, refuse collection vehicles and passenger cars sound like dreams of the future, but they are already in use in the present,” explained André Engbrecht, EWE hydrogen expert, in a keynote presentation.

What is needed is an infrastructure for generation, transport and storage as well as users of green hydrogen. The energy service provider is working hard to achieve this and is involved in numerous projects along the hydrogen value chain in the northwest. The construction and operation of filling stations for the hydrogen-powered electric vehicles, because these are hydrogen vehicles, is just as much a part of this as the construction of electrolysers like the one in Huntorf, where hydrogen is produced using renewable energies that cannot be fed into the power grid, for example,” explains the EWE expert.

Green hydrogen, he says, is an important element for EWE on the road to climate neutrality and towards greater independence in the energy future. “The way there is challenging and hardly feasible without subsidies. However, we must and will take this path, because hydrogen is essential for a climate-neutral future,” said André Engbrecht in Brake.

In addition to hydrogen mobility on the road, EWE also has hydrogen-powered trains in its sights. EWE is currently promoting the idea that in a few years’ time, local trains powered by fuel cells will be running on lines in the northwest that do not have overhead lines.

EWE envisages that the fuel required for this would be produced and stored in Huntorf. Whether this will happen depends on the state government. It wants to decide by the end of 2022 whether hydrogen-powered trains should be purchased for the northwest.

Climate protection is also high on the agenda in the Wesermarsch district. “With a wide range of measures such as the construction of municipal electric charging stations and the purchase of municipal e-cars, the climate campaign ‘Stadtradeln’ (city cycling) or the motto tour ‘Climate Change’, we are sending an important signal and getting involved in a variety of ways. After all, the future of our region depends on how we counter the consequences of climate change,” said Stephan Siefken, District Administrator of the Wesermarsch district at the event.

The Hydrogen Day, he said, is another activity to demonstrate viable alternatives for the future and to set an example for the region. “With a green hydrogen economy, we can make a significant contribution to CO2 reduction and thus also strengthen the local economy and protect nature. And the current, energy-political situation also shows us how important it is to rethink energy supply and move towards independence and climate protection,” affirmed District Administrator Siefken.

The Hydrogen Day in Brake also focused on the establishment of a hydrogen network “Mobility”. District Administrator Siefken praised the establishment of this network: “Formats and events of this kind are important, because only together can we meet the challenge of a climate-neutral future and use synergies.”

Five new energy centers to be launched by Eurowind Energy

HyBit project worth millions gets underway