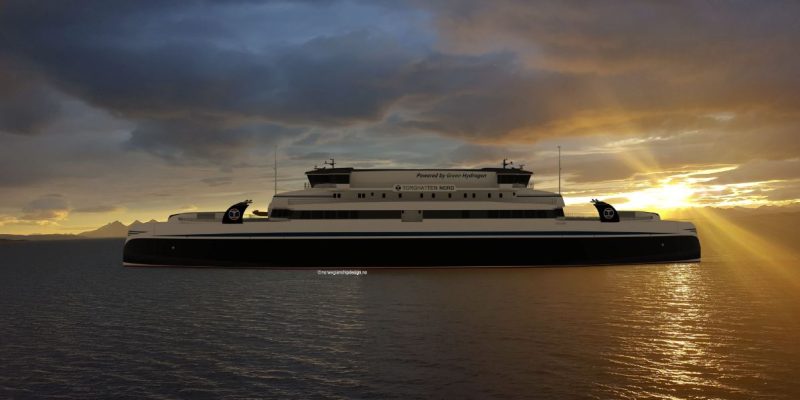 The two Norwegian Ship Design boats will use at least 85% green hydrogen-based fuel, lowering CO2 emissions along the trip by 26,500 tons annually. The hydrogen storage portion of the hydrogen system, which supplies hydrogen to the fuel cells, and the fuel cells themselves, which provide electricity for the propulsion and all other users on board, are the two primary parts of the hydrogen system. The ferries are anticipated to start running in October 2025.

Following the conclusion of a thorough and helpful risk-based HAZID certification, LR granted the AiP. Torghatten Nord has chosen LR as the class society because of its experience and competence in initiatives involving hydrogen-fueled boats and new fuels. As the marine sector transitions to sustainable fuel sources, the initiative represents a significant milestone.

“We are glad to grant Torghatten Nord permission in principle based on an exhaustive risk examination of the idea and technology,” said Markus Büsig, North Europe President of Lloyd’s Register. Since Lloyd’s Register has operated in Norway for 150 years, we consider this to be a significant undertaking that will advance the use of hydrogen as a secure and environmentally friendly fuel in the future.

CEO of Torghatten Nord, Torkild Torkildsen, stated: “We are happy with the AiP and honored to cooperate with the foremost authorities on hydrogen as ship fuel. A major climate initiative of significant relevance to the whole marine industry, not least Bod and Lofoten, is the development of hydrogen ferries on such a long and vulnerable route.

Because of Lloyd’s Register’s experience, we are able to base the innovative work we conduct on passenger safety, operational stability, and exceptional trip comfort.

The CEO of Norwegian Ship Design, Gjermund Johannessen, stated: “The boats that will be designed, constructed, and used are unequaled anyplace in the world. Compared to what we know as typical ships today, we need to think differently and come up with whole new ideas. Both Torghatten Nord and Lloyd’s Register did a great job putting this Approval in Principle in place.

We’ve looked at a variety of options for the onboard hydrogen system. and have developed an original, secure idea that takes into consideration the characteristics of hydrogen. What we are now building will probably serve as the benchmark for an entire class of hydrogen-powered passenger ships.

The AiP expands on LR’s zero-carbon initiatives in the area, such as the most recent Approval in Principle for the With Orca, a hydrogen-fueled bulk carrier that was approved in March 2022.