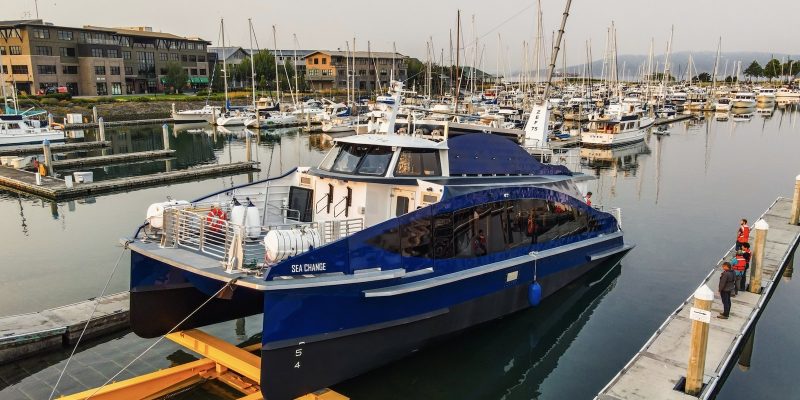 Bellingham has become the first city in the United States to launch a hydrogen-powered ferry.

The majority of large vessels run on diesel or even more polluting fuels. They emit carbon dioxide, which is bad for the environment, as well as particulates, nitrogen, and sulfur oxides, which are bad for the lungs.

“The best part about this method is that the sole result is hot water,” said Ron Wille of All American Marine in Bellingham. “To be able to send a boat out to sea and have it run with zero emissions is very revolutionary.”

Any pollution caused by the 75-passenger catamaran’s operation would be due to the production of hydrogen fuel in the first place.

Switch Maritime, an impact investing firm, commissioned All American Marine to build the Sea Change for them. Switch Maritime’s goal is to fund and own a fleet of zero-emission ferries that will be leased to ferry companies.

The Sea Change, which is intended to travel at 18 miles per hour and have a range of more than 300 miles, is now undergoing sea testing in Bellingham Bay and is awaiting certification from the US Coast Guard for its revolutionary fuel system. Then it’ll be shipped to California for three months of testing before going into operation on San Francisco Bay.

Wille explained, “The boat is meant to operate for two days before refueling.”

Battery-powered boats, which Washington State Ferries is investing in to minimize the Puget Sound fleet’s carbon footprint, have to plug in for recharging after less than two hours of sailing.

As it continues to replace its old diesel-electric fleet, Washington State Ferries’ Ian Sterling said the agency is sticking with the more established technology of battery-powered boats for the time being.

The conversion of the ferry Wenatchee to battery power, which has been out of service since an engine fire in April, could begin this fall, according to Sterling. It would take “decades” to replace the whole 21-ferry fleet with nonpolluting vessels.

According to Switch Maritime’s Elias Van Sickle, the average ferry in the United States is 27 years old, nearing the end of its intended 30-year lifespan.

“We’re hoping to avoid a lot of those ferries being replaced by diesel boats,” he said. “We want to show that these zero-carbon choices can be implemented right now — not tomorrow.”

Even still, generating hydrogen fuel today is far from being a carbon-free solution.

Natural gas, a fossil fuel that frequently leaks during drilling and transportation and is especially powerful at heating the climate when it does, is used to make hydrogen gas in an energy-intensive process.

The oil and gas sector is pitching “blue hydrogen,” which is created from fossil fuels but includes carbon-capture technology to decrease its climate impact, as a transitional energy source to zero-carbon “green hydrogen,” which is made from water and powered by renewable energy.

“Basically, any molecule with a ‘H’ in it may be cracked and hydrogen extracted,” Van Sickle explained. “All it takes is a little bit of effort.”

The House of Representatives is currently debating an infrastructure measure that was passed by the Senate in August that dedicates $9.5 billion to encourage hydrogen fuel development.

Some researchers and industry critics say that “blue hydrogen” is a climate-damaging ruse to allow dangerous fossil fuel production to continue unchecked.

The California Air Resources Board provided a $3 million grant for the Sea Change. These funds were raised through California’s cap-and-trade system, which levies fees on big polluters and invests the proceeds in clean technology.

Washington state passed a similar cap-and-trade policy in May, with the goal of reducing pollution and funding alternative energy by 2023.