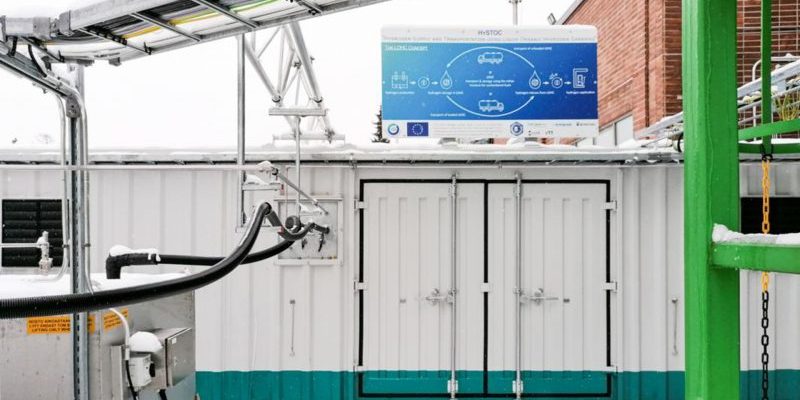 At local double-digit sub-zero temperatures, the Liquid Organic Hydrogen Carrier plant device from German industry leader Hydrogenious LOHC Technologies for the storage and release of hydrogen from the liquid carrier medium has started operating without any problems.

The hydrogen release plant is now operational, and the efficiency of the re-released hydrogen is being tested for a minimum of six months by the participating Finnish research institute VTT in Espoo. To be compatible with fuel cell vehicles, the released hydrogen must meet stringent purity requirements. After that, there is nothing technically preventing the so-called release box from being installed at its final destination, a public hydrogen refueling station.

HySTOC stands for “Hydrogen Supply and Transportation Using Liquid Organic Hydrogen Carriers” in the EU project. The project’s goal is to develop and test a cost-effective hydrogen value chain in Finland, from production (Kokkola site, partner company Oy Woikoski AB) to use in the mobility sector through a hydrogen filling station, in order to promote international learning. The linking part is the German Hydrogenious LOHC Technologies GmbH’s patented LOHC technology and plant systems based on it.

By connecting hydrogen to the Erlangen-based company’s liquid carrier material, it can be transported to any customer using standard liquid fuel logistics at ambient temperatures and released from the carrier there. The hydrogen emitted from the LOHC is filtered to hydrogen fuel levels by the project partner HyGear’s Pressure Swing Adsorption (PSA), which can be used to refuel cars or trucks with fuel cell engines. HySTOC’s scientific research partners are Finland’s VTT Technical Research Centre and Germany’s Friedrich-Alexander University Erlangen-Nuremberg (Chair of Chemical Reactor Technology).

Despite the local -23 degrees Celsius, the StorageBox from Hydrogenious LOHC Technologies has now been successfully commissioned at Woikoski’s hydrogen production site in Kokkola. The project’s StorageBox will hold approximately 22 kilograms of hydrogen per day, bound to 480 litres of carrier medium.

The volume’s ReleaseBox, which was shipped to VTT’s Bioruukki test facilities in Espoo in November 2020, is now operational as well. As a result, the project’s core phase has begun: the ReleaseBox will be run in Espoo for 2,000 hours, with the consistency of the emitted hydrogen being scientifically tested. This is because, according to ISO 14687:2-2019, hydrogen purity must be guaranteed for use in fuel cells.

In addition, VTT will investigate the effects of a few selected impurities in a 1 kW PEM FC system (Proton-Exchange Membrane Fuel Cell) in steady-state and cyclic activity under typical automotive conditions. “VTT has a long experience of gas analysis and PEMFC research; this expertise will be put to good use in the HySTOC project to fully grasp the potential of this LOHC-based technology for automotive applications,” says VTT project manager Dr. Saara Viik. In comparison to pressurized or liquid hydrogen, VTT’s experts completed a full life cycle and techno-economic evaluation of this technology last year and discovered that it can be both environmentally and economically viable. Woikoski’s PEMFC vehicle will be powered by hydrogen from the ReleaseBox in six months if everything goes according to schedule.

Woikoski operations have gotten off to a slow start. The company’s involvement began with the implementation. In collaboration with the organization, it developed test facilities and installed the StorageBox/ReleaseBox, as well as assisting operational systems (electricity, automation, and pumping systems) for both the Kokkola Hydrogen Production Site and Espoo VTT. Despite the corona pandemic and the traditional Finnish winter season, which includes freezing periods from time to time, all went smoothly. Woikoski is also processing hydrogen for the test at the Kokkola Hydrogen factory, then using the assembled technology to bond the hydrogen to the liquid carrier material. In addition, the company is in charge of transporting the refined hydrogen to Espoo through the liquid fuel unit, as well as releasing the hydrogen from the carrier in the ReleaseBox, which will be scientifically tested by VTT.