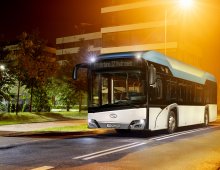 Urbino 12 hydrogen buses have been chosen by another carrier. Thirteen hydrogen vehicles will travel all the way to Frankfurt this time. In 2022, the buses will be deployed on designated routes.

Solaris Bus & Coach has been awarded a contract to supply 13 hydrogen-powered buses. The company In-der-City-Bus, which is in charge of public transportation in Frankfurt, made this call.

The contract is yet another win for the manufacturer, which has been steadily expanding its electromobility footprint by supplying hydrogen buses, electric buses, and trolleybuses to an increasing number of European cities.

Due to the use of energy provided by a fuel cell (of 70 kW), the Urbino hydrogen technology is fully environmentally friendly; the only by-products of the chemical reaction that occurs in it are heat and steam.

The driveline, which consists of an axle with electric motors, receives the electric power produced during the reverse electrolysis process. Furthermore, each bus will be equipped with a Solaris High Power battery, which will provide additional electric power storage. The hydrogen for the bus’s propulsion will be held in gaseous form in roof-stacked tanks.

The Solaris Urbino 12 hydrogen buses will be equipped with a variety of cutting-edge Advanced Driver Assistance System (ADAS) solutions to aid the driver’s work, including the MirrorEye system, which replaces traditional side mirrors with cameras to improve the driver’s road vision.

The view from the camera is shown on the in-vehicle screens. Interestingly, the displays can also show distance indicator lines for different sections of the bus, such as the back, specific doors, or axles, making manoeuvring and parking easier and safer for the driver.