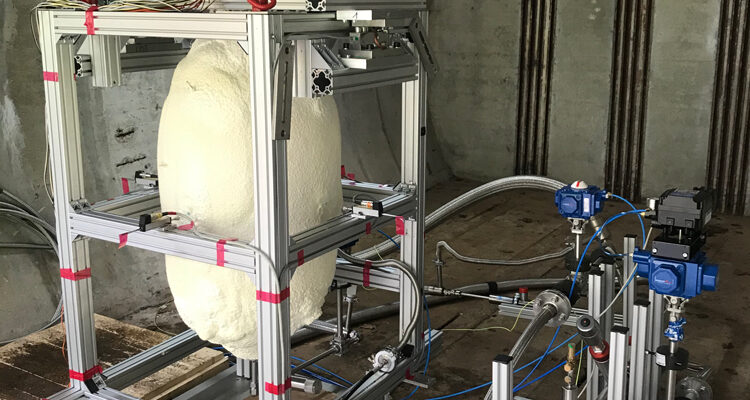 MT Aerospace AG, a subsidiary of the space and technology group OHB SE, has reached a significant milestone in its development of a CFRP upper stage for a future European launcher.

In early June 2021, it had its prototype high-performance tank for rocket engines made of carbon fiber reinforced plastic (CFRP) tested at the DLR test center in Trauen as part of the European Space Agency (FLPP).

Despite the absence of an extra internal coating, the CFRP tank has demonstrated its structural load-bearing capability and tightness over multiple pressure cycles at cryogenic temperatures about 20 K (-253°C) (linerless).

“The test result is a groundbreaking success in Europe; after all, fuel tanks are safety-critical elements in any propulsion system,” explains Hans Steininger, CEO of MT Aerospace AG. “We have provided proof that a high-performance pressure tank made of CFRP can withstand cryogenic stress. In the future, the use of CFRP high-performance tanks should not only enable safe rocket launches, it can also exploit the advantage of significantly lower mass compared to metallic tanks.”

The test campaign was conducted in stages, as hydrogen requires particular handling and storage. Hydrogen becomes liquid at a cold 20 K (-253.15 °C). At room temperature and at around 77 K (-196.15 °C), the test specimen, a 400-mm-diameter tank, was first subjected to a helium leak test. After that, it was filled with liquid, namely cryogenic hydrogen (LH2). After filling, the tank was even inflated beyond the supercritical LH2 pressure in order to simulate a stress situation that is to be expected when employed in a rocket flight. Thus, MT Aerospace was able to demonstrate effectively that the CFRP tank it developed and constructed meets the stated standards for LH2 tightness throughout the load history, even when subjected to a combination of cryogenic thermal loads and concurrent, high mechanical stresses. Additional filling and draining cycles confirmed the tank’s good performance.

To ensure the tank’s quality, a further helium leakage test was undertaken. This cleared the way for MT Aerospace AG to conduct another test, this time focusing on the tank’s behavior when filled with liquid oxygen (LOX) at cryogenic temperatures. This second test campaign will demonstrate that the CFRP material chosen is suitable for use in a future upper stage with both liquid hydrogen and liquid oxygen.

For MT Aerospace AG, the test result provides a solid platform for subsequent material selections related to the PHOEBUS upper stage demonstration project, which was recently commissioned by ArianeGroup GmbH. By the end of 2022, the project will have defined, manufactured, and tested tanks with a diameter of two meters in preparation for a near-full-scale structural upper stage demonstrator.

“The test result is very encouraging for us, also and especially in view of our recent investment to expand the company’s CFRP manufacturing environment,” adds Dirk Lanuschny, Head of Launcher Programmes at MT Aerospace AG, referring to an Automated Fibre Placement facility that will enable the production of tanks with diameters typical of launch vehicles from early 2022. “As part of the PHOEBUS project, we intend to manufacture the two cryogenic tanks (LH2, LOX) as well as the primary structures of an upper stage demonstrator with a diameter of 3.5 meters.”