Hydrogen to cover half of Singapore’s power needs by 2050

According to Deputy Prime Minister Lawrence Wong, Singapore will develop hydrogen as a significant energy source to meet up to half of the country’s energy needs by 2050.

According to Mr. Wong, who is also the Finance Minister, the Ministry of Trade and Industry (MTI) would start by soliciting interest for a “small-scale commercial project on using low-carbon ammonia for power generation,” among other things.

Wong discussed Singapore’s goal to use hydrogen as a key energy source during the Singapore Energy Lecture at the Singapore International Energy Week held at the Marina Bay Sands. He referred to this plan as “Singapore’s National Hydrogen Strategy.”

The clean alternative to natural gas, which now supplies 95% of Singapore’s energy needs, is hydrogen. This is due to the fact that natural gas and hydrogen both produce waste products, but hydrogen also produces the waste product water vapor.

In addition to domestic renewable energy sources and electricity imports, he predicted that by 2050, hydrogen may meet up to 50% of our energy requirements.

Recently, on October 17, Singapore and Vietnam signed an agreement that covers the use of hydrogen and other green energy sources.

The two nations’ memorandums of understanding focused on working together on energy, especially the development of low-carbon energy technologies like hydrogen and ammonia, as well as the infrastructures needed to support them.

Singapore does not have many possibilities for green energy, according to Wong. We lack the land for sizable wind or solar farms or swift-moving rivers for the generation of hydroelectric electricity, the man claimed.

“However, we have been successful in overcoming our natural limitations and progressing in the reduction of our greenhouse gas emissions.”

This includes doubling the earlier goal of 16 percent made in 2009 to reduce the nation’s greenhouse gas emissions by 32 percent below business-as-usual levels in 2020.

Although Wong acknowledged that low-carbon hydrogen technology and supply chains are “still immature,” he said that global investments in the energy source had expanded, supported by policies from nations to encourage this.

He declared that “the globe is presently at an inflection point in global hydrogen development.”

Given these encouraging advances, Singapore feels that using low-carbon hydrogen could be the next step in its attempts to cut emissions.

The nation will test cutting-edge hydrogen technologies that are almost ready for commercial application, like the utilization of low-carbon ammonia for power production.

This might lead to Singaporeans having access to power produced from low-carbon hydrogen as early as 2027. We also expect that this initiative will serve as a catalyst for the growth of ammonia supply chains to meet the needs of marine bunkering, he added, adding that additional information will be made public in the upcoming months.

Hydrogen technology research and development will also be carried out, with the government investing an additional S$129 million in its research program for low-carbon energy.

According to him, this funding would go toward initiatives that will enable Singapore to safely import, handle, and utilize hydrogen and its carriers.

In addition, the government will collaborate closely with business and international partners to develop and expand low-carbon hydrogen supply chains.

The development of frameworks and standards to certify the low-carbon origin of hydrogen imports that can be recognized across jurisdictions will be one of the main focal areas. This could take the form of an origin guarantee certification.

The assurance that the hydrogen being utilized is in fact sustainable and capable of advancing our climate goals, he said, is essential to giving hydrogen end-users and the global community. 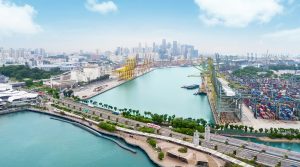