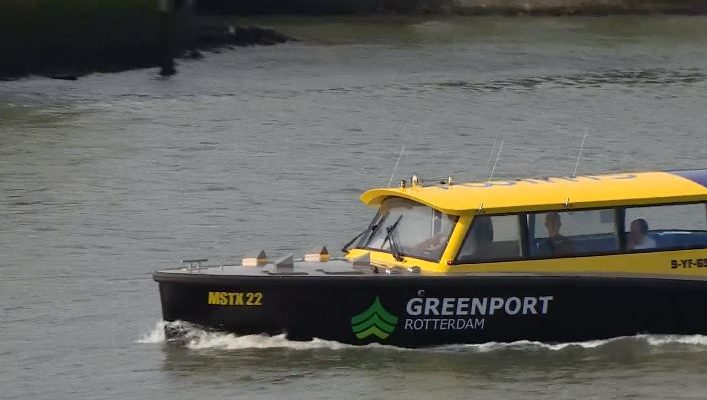 A Hydrogen Water Taxi has begun running in the Nieuwe Maas’s waters as of today. a first for the Rotterdam port.

The MSTX 22 seems to be a typical black and yellow water taxi from the exterior. Inside, there has been a significant change: four enormous hydrogen tanks have been installed in place of the combustion engine. Water emissions rather than diesel smoke are another difference. Watch the video below to see a special voyage we went on before the MSTX 22 was dedicated.

By 2030, we hope to sail without emitting any CO2, according to Daan van den Have. He sees the MSTX 22 as the future of sailing and is a co-owner of the Water taxi. “400 liters of fuel are required daily for a rapid water taxi. equivalent to 40 Tesla batteries. And a water taxi cannot accommodate that. This issue can be solved with hydrogen.

at a speed of 20 km/h
Skipper Rob smiles as he takes a seat in the captain’s chair. He describes the MSTX 22 as “a fantastic new feature.” It moves a bit more quickly than the other electric water taxis we currently have, moving at 20 kilometers per hour.

What will the new boat’s passengers and those who live near the Nieuwe Maas notice? The boat is quieter and emits no gas. But the cost is the same. Because they are riding in a hydrogen taxi, people will no longer pay.

LOTTE, Sumitomo of Americas, and Syzygy Plasmonics to partner on photocatalytic ammonia cracking