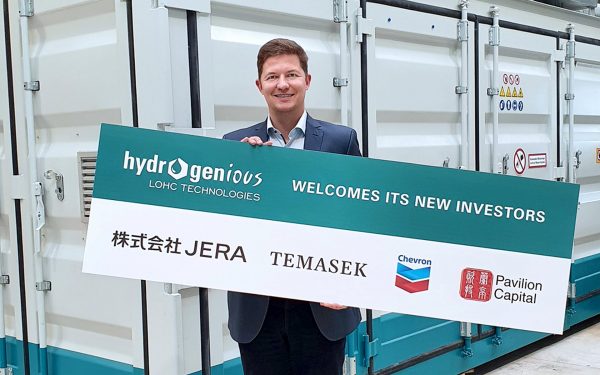 Hydrogenious LOHC Technologies, a fast-growing cleantech pioneer based in Bavaria, Germany, has raised an additional €50 million in funding to scale and commercialize its technology.

JERA Americas and Temasek led the oversubscribed financing round, with Chevron Technology Ventures and Pavilion Capital investing for the first time. The investment was also supported by existing investors AP Ventures, Royal Vopak, and Winkelmann Group. Commercial systems will be deployed in landmark hydrogen projects in Europe, the Middle East, and other parts of the world, including APAC and the Americas.

The transformational LOHC technology developed by Hydrogenious enables a safe and low-cost means of bulk hydrogen storage and delivery, bridging the gap between supply and demand on a regional, national, and worldwide scale.

The difficulty to safely and efficiently store and transport huge volumes of hydrogen from the regions of supply to the centers of demand is now limiting global decarbonisation and the widespread growth of the hydrogen industry. Governments and corporations are looking for ways to avoid investing heavily in new storage, transportation, and liquification infrastructure while also limiting the dangers of potentially harmful or deadly alternatives.

The Liquid Organic Hydrogen Carrier (LOHC) technology from Hydrogenious links hydrogen to a non-toxic, non-flammable liquid, allowing for safe and efficient transportation and distribution. Because hydrogen can be stored and transported using existing fossil fuel infrastructure, it can be produced and transported in large quantities everywhere on the planet, making hydrogen the commodity of choice for global industry and mobility.

CARB: CA’s 100-station hydrogen refueling station target could be met by end of 2023