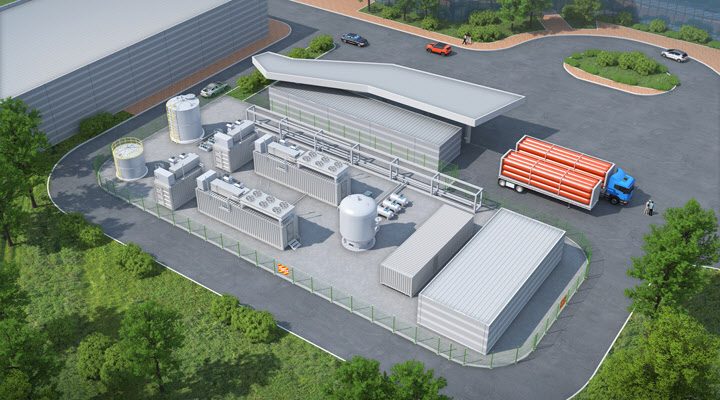 The Ministry of Trade, Industry, and Energy has chosen Hyundai E&C to build a ‘water electrolysis-based hydrogen production base building project’ in 2022.

An infrastructure capable of producing, storing, and transferring more than 1 ton of hydrogen per day will be created in collaboration with Jeollabuk-do, Buan-gun, Jeonbuk Techno Park, and Techcross Water & Energy.

Water electrolysis is a process for producing oxygen and hydrogen on a large scale by decomposing water with electricity, and it is gaining traction as a key component of clean hydrogen generation. Clean hydrogen is defined as hydrogen that emits no carbon dioxide or emits considerably less carbon dioxide during its generation.

Hyundai E&C is in charge of the project’s basic/detailed design, main equipment procurement, and building of the hydrogen production base, which includes water electrolysis facilities, shipping, and energy supply facilities.

Furthermore, because hydrogen, a key energy source in the carbon-neutral era, is expected to be a new opportunity in the future energy and plant market, we are working to improve core technology and basic design capabilities in hydrogen storage and transportation, as well as water electrolysis-based hydrogen production, and to conduct research and development. We’re also working hard to acquire qualified technical personnel for the project. In addition to securing basic design capabilities and business performance in the hydrogen liquefaction field for hydrogen transportation, the company intends to continuously discover areas in green hydrogen production that can be commercialized in order to strengthen core competencies throughout the hydrogen field entire cycle.

Meanwhile, in December of last year, Hyundai E&C established the Carbon Neutral Response Task Force (TF) and began developing mid-to-long-term plans and roadmaps for attaining carbon neutrality and long-term implementation. It intends to play a key role in the transformation of energy sector infrastructure by lowering greenhouse gas emissions at sites throughout the world, building a construction process based on smart technology, and expanding new eco-friendly companies such as energy conversion.

“In order to preemptively lead the hydrogen business, where securing basic technology is critical, we are taking the lead in creating infrastructure by forming a collaboration with premier enterprises,” a Hyundai E&C official stated.