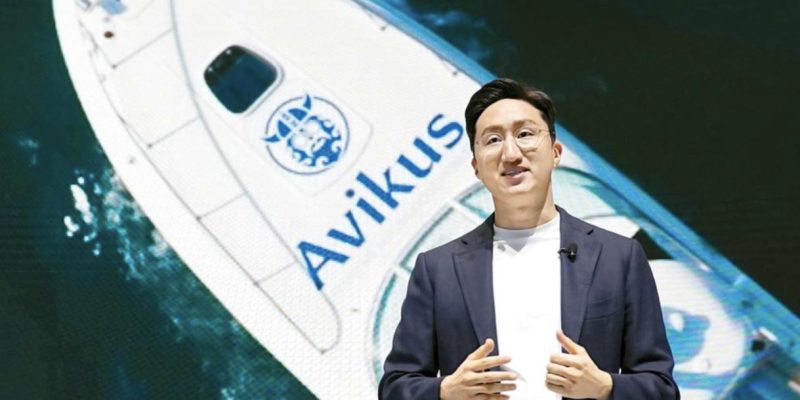 The way we perceive the water must be radically altered if Hyundai Heavy Industries Group is to have a bright future.

The water will no longer be a means of travel, but rather a final destination. The ocean will become a fully functional area for sustainable development. In order to do this, we will construct both huge ships that have driven the rise of the Hyundai Heavy Industries Group over the last 50 years and sophisticated, environmentally friendly vessels. A worldwide offshore hydrogen industrial ecosystem will be built under our direction.

At the Consumer Electronics Show (CES), which was held in Las Vegas, Nevada, in January, Chung Ki-sun, president of HD Hyundai (formerly Hyundai Heavy Industries Holdings) and Korea Shipbuilding & Marine Engineering, revealed the future direction of the Hyundai Heavy Industries Group. President Jung made the following statement in a public speech on behalf of the company: “I shall be reborn from the world’s top shipbuilder to a future builder who produces new values for mankind.”

The 50th anniversary of Hyundai Heavy Industries Group was commemorated in March. Prior to that, President Chung, the third generation owner family member, and grandson of the late Hyundai Group honorary chairman Chung Ju-young, was named CEO of the group’s holding company and important affiliates.

This year marks the 40th birthday of President Jung, who announced with great ambition that he would discover fresh food for the next 50 years in the sea that gave rise to Hyundai Heavy Industries. In his early thirties, his father, Mong-Jun Chung, chairman of the Asan Foundation, had previously held the position of president of Hyundai Heavy Industries before becoming chairman in his early forties.

“Autonomous navigation” and “hydrogen” are the two crucial terms for the group’s new venture, which President Jung recommended outside. Avikus, a business that specializes in autonomous driving, is at the epicenter of the industry. The development of the ship’s autonomous navigation system is the responsibility of Avicus, which Hyundai Heavy Industries Group established as its first in-house venture firm in December 2020.

A 180,000 m3 super-large liquefied natural gas (LNG) carrier and SK Shipping successfully navigated their way across the ocean in June of this year. It is the first instance in history of a ship being piloted across an ocean using an automated navigation system known as “HiNAS 2.0.” The equipment market for autonomous boats is anticipated to increase at an average annual rate of 12.6% to reach $235.7 billion (about 315 trillion won) by 2028, according to Accute Market Reports, a global market research agency.

The rise of the maritime leisure sector is something that Hyundai Heavy Industries Group anticipates would result from the advancement of autonomous navigation technology. Small recreational boats are the industry in which Avicus plans to implement autonomous navigational systems after big commerce ships. Autonomous navigation is seen as a necessary technology for entry into a number of maritime businesses, including logistical innovation, resource research, pollutant removal, and study of marine ecosystems.

It is the collective responsibility of the organization to build the ocean hydrogen value chain (value chain). Because he has competitive subsidiaries in every industry, from energy production, processing, and transportation to plant building, President Jung is confident in the success of the connected company. President Chung is particularly certain that only Hyundai Heavy Industries Group can develop a “offshore hydrogen value chain” that connects floating wind farms, green hydrogen production facilities, and ships that transport hydrogen.

A huge liquid hydrogen transporter is what is absolutely needed to finish the ocean hydrogen value chain. The most complicated type of vessel is a liquid hydrogen carrier. The technology will secure an unparalleled market share and have distinct competitiveness for a very long time if it is prevented. The development of a 20,000 m3 big liquefied hydrogen carrier will be finished by Korea Shipbuilding & Marine Engineering, the holding company for the shipbuilding branch of Hyundai Heavy Industries Group, by 2027.

Ministers to meet in Ulm and discuss hydrogen

Rosatom to produce hydrogen from methane