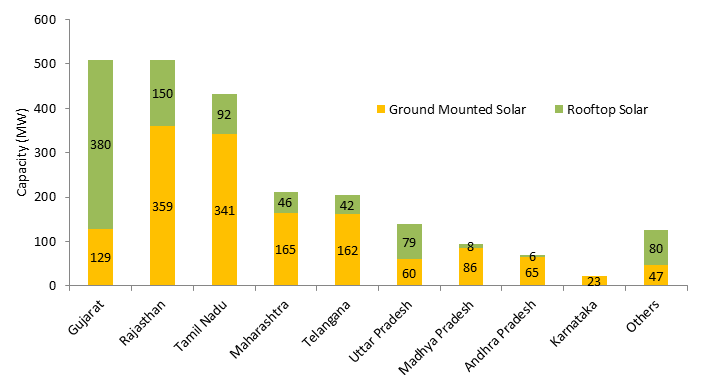 Approximately 2320 MW of solar power, comprising 1437 MW of ground mounted solar and 883 MW of rooftop solar, was added for the period from January 2020 to September 2020 in India.

The leading states with the majority of large-scale solar installations during this time were Rajasthan (360 MW), Tamil Nadu (341 MW), and Maharashtra (165 MW).

Prior to the COVID 19 outbreak, JMK Research had predicted the addition of approximately 7-8 GW of utility-scale solar energy in 2020. In the first nine months, however, only 1.4 GW of capability was commissioned.

Because of COVID 19, construction delays, insufficient supply movement of equipment, and labor shortages inevitably resulted in project delays. MNRE has given a blanket extension of five months to all project developers to compensate for this.

Much of this delayed capacity is now projected to begin in the first half of 2021.

Despite the lockdown and COVID 19 on the rooftop solar side, about 883 MW of new capacity was installed. With 380 MW of power installed, Gujarat ranks first, contributing almost 43 percent of the total rooftop installations in the first nine months of 2020, followed by Rajasthan (150 MW).

The primary reason behind the substantial addition of power in Gujarat is the “Surya Urja Rooftop Yojana-Gujarat,” which aims to install solar rooftops in the residential sector for 8 lakh customers by March 2022. This program grants 40 percent of the state subsidy for the construction of systems up to 3 kW in size and 20 percent of the 3 kW-10 kW subsidy.

The MSME policy implemented by the Gujarat state government in September 2019, as part of which MSMEs are permitted to install solar projects with more than 100 percent of their approved load or contract demand, is another explanation for this upsurge in rooftop operation in Gujarat.

Earlier, 50 percent of the authorized load was the permissible installation limit. MSMEs are now able to sell surplus solar energy to the state government at a price of Rs. 1.75/ kWh, as per the new policy. The policy also requires the procurement of solar power by MSMEs from third parties.