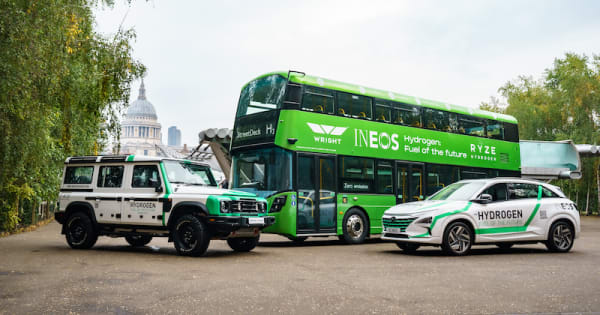 INOVYN, a subsidiary of INEOS, announced plans to invest in existing production at Runcorn to enable the company to offer compressed fuel-cell quality hydrogen to the mobility and power generating industries.

This initiative is part of INEOS’s more than €2 billion investment in Green Hydrogen announced earlier this week.

INOVYN, which has been producing and utilizing low-carbon hydrogen at its Runcorn facility for over a century, is ready to significantly increase its supply of hydrogen to fuel the UK’s transportation network.

Specifically, the investment would establish specialized on-site facilities for the purification and compression of current low carbon, fuel cell quality hydrogen in preparation for further loading, transportation, and distribution to fueling stations around the UK.

Hydrogen generation at Runcorn has the potential to offer low-carbon fuel for over 1,000 buses or 2,000 vehicles where battery electric drive systems are insufficient for range, payload, or critical refueling periods.

INOVYN is already the largest operator in Europe of electrolysis technology for the production of pure hydrogen. The investment at the site will jump-start the emerging hydrogen sector and help the North West meet its regional carbon neutrality objective.

Geir Tuft, CEO INOVYN said: “Our expanding portfolio of clean hydrogen projects strengthens INOVYN’s sustainability strategy and supports the drive to net-zero across the UK and the rest of Europe.  INOVYN is in a unique position to reaffirm its expertise in hydrogen production and electrolysis, and to progress the green energy transition through the use of clean hydrogen.”

The project builds on INOVYN’s hydrogen portfolio in the United Kingdom, including our involvement with consortiums such as HyNet North West, a clean hydrogen development project underpinned by INOVYN’s storage technology infrastructure that will enable the North West of England and North Wales to access low-carbon energy.

INOVYN and its parent firm INEOS are involved in a number of initiatives around Europe aimed at developing green hydrogen and phasing out carbon-based energy, feedstocks, and fuel sources. The group will collaborate closely with national and European governments to advance hydrogen’s critical role in the emerging Green Economy.

Snam, Toyota and CaetanoBus to accelerate development of hydrogen mobility