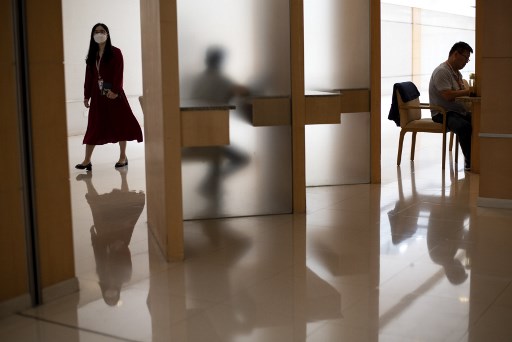 A Huawei employee (L) walks at the company headquarters in Shenzhen, China's southern Guangdong province on May 19, 2020. - Huawei on May 18 assailed the latest US move to cut it off from semiconductor suppliers as a "pernicious" attack that will put the Chinese technology giant in "survival" mode and sow chaos in the global technology sector. (Photo by NOEL CELIS / AFP)

According to Economy, Trade and Industry Minister KAJIYAMA Hiroshi, Japan recognizes Saudi Arabia and other Middle Eastern countries as vital partners in establishing a hydrogen-based society.

“A large-scale and economical hydrogen supply is indispensable,” the minister continued, adding that “it is important to use not only home, but also foreign renewable energy resources and hydrogen produced from fossil fuels to reach our goal.”

Kajiyama also noted that Japan and the UAE have agreed to collaborate on hydrogen projects and share information on the development of hydrogen supply chains.

“We’re also talking about [hydrogen cooperation] with other Middle Eastern countries, and we’d like to keep working together to build a hydrogen-based society,” he added.

Croatia to produce first hydrogen by 2025