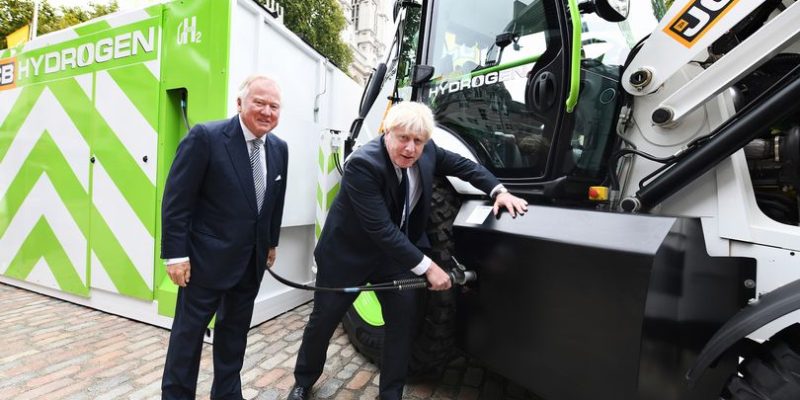 JCB, a manufacturer of diggers, is investing £100 million in a project to develop ultra-efficient hydrogen engines.

A team of 100 engineers is already working on the idea, according to the company, which has plants in Staffordshire, Derbyshire, and Wrexham.

Now, 50 additional engineers are being hired to ensure that the first machines are available for purchase by the end of 2022.

A prototype hydrogen-powered JCB backhoe loader has previously been shown, and now a second JCB equipment, the Loadall telescopic handler, has been unveiled at a central London event attended by Prime Minister Boris Johnson.

“It was fantastic to see JCB’s super-efficient hydrogen engines, which have the potential to revolutionize UK manufacturing, assist us in meeting our climate targets, and accelerate the UK’s hydrogen economy – an exciting area that will be critical in combating climate change, creating new jobs, and attracting investment.”

At COP26 in Glasgow, JCB, the world market leader in backhoe loaders and telescopic handlers, will demonstrate its hydrogen technology in the Green Zone.

“Our type of machinery will need to be fuelled by something other than fossil fuels,” JCB chairman Lord Bamford stated. We produce diesel-powered machinery, therefore we need to find a solution, and we’re working on it right now.

“We’re investing in hydrogen because we don’t view electric as an all-around answer, especially for our sector because it can only power smaller machines,” says the company.

“It means we’ll keep producing engines, but they’ll be super-efficient, cheap, high-tech hydrogen motors with zero CO2 emissions that can be brought to market rapidly utilizing our existing supply chain,” says the company.

“These will be the first hydrogen engines in our sector, created by British engineers in the United Kingdom.” Hydrogen motors have the potential to help the UK meet its CO2 reduction objectives faster.”

JCB has been making engines since 2004, with factories in Derbyshire and Delhi, India. This year, JCB will mark a significant milestone by producing its 750,000th engine.