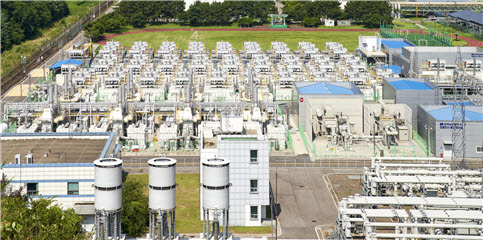 South Korea also unveiled a hydrogen business plan, which includes obtaining green hydrogen manufacturing technologies. The government said that it will assist the domestic industrial ecosystem of hydrogen fuel cells for power generation with world-class competitiveness using this completion ceremony as an opportunity.

Korea Southern Power committed over 340 billion won over four years to create a hydrogen fuel cell power production complex with an installed capacity of 80 MW, the world’s largest for a single complex, after launching the first phase of the hydrogen fuel cell business in 2017.

Shinincheon Bitdream Hydrogen Fuel Cell generates environmentally friendly power for 250,000 families in the metropolitan region, as well as hot water for 44,000 households. Because it is feasible to clean the air that more than 700,000 people may breathe every day while collecting power, the impact of lowering fine dust in Incheon is also envisaged.

Regional base-type by-product hydrogen projects, smart RE100 green industrial complexes, and fuel cell-based hydrogen convergence projects such as smart farms and mobility will be encouraged in the future, with the completion of the Shinincheon Bitdream hydrogen fuel cell serving as a stepping stone.

“Before it is too late to solve the global climate catastrophe, we must adopt carbon neutrality,” said Seungwoo Lee, president of Korea Southern Power. “I’ll do it,” he declared.

The government will also use this completion ceremony to encourage the transformation of the world’s most competitive hydrogen fuel cell industrial ecosystem into an environmentally benign and resident-friendly distributed power source. The ‘Clean Hydrogen Power Purchasing and Supply System (CHPS)’ will be implemented as soon as the National Assembly passes an amendment to the Hydrogen Act, which is presently pending. The ‘Clean Hydrogen Certification System’ will also be implemented to ensure that clean hydrogen receives unique assistance.

“The ‘New Incheon Bitdream Fuel Cell’ power plant has contributed to the expansion of the power system supply capacity in Seo-gu, Incheon, and will stably supply electricity to the high-tech hydrogen economy production facilities in the region,” said Kang Kyung-seong, head of the Ministry of Trade, Industry, and Energy’s Energy Industry Department. Please perform your function as a reliable power source in line with the power supply’s purpose.”

Eon to make hydrogen a new gold mine