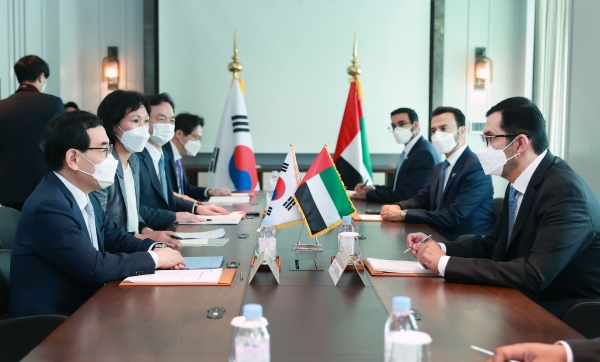 Minister of Trade, Industry, and Energy Changyang Lee met with Sultan Ahmed Al-Jaber, UAE Minister of Industry and Advanced Technology and President of Abu Dhabi National Oil Corporation (ADNOC), who was visiting Korea for industrial technology cooperation and ways to cooperate in the energy supply chain.

Based on the successful promotion of core cooperative projects such as the Barakah nuclear power plant, oil field development, and energy infrastructure construction, the two sides decided to expand economic cooperation to new industries such as digital transformation, e-learning, and bio in the future. Furthermore, the two nations decided to work together aggressively on the ’50th Anniversary Project for Future Generations,’ which the UAE is pushing to mark the country’s 50th anniversary of its foundation.

The UAE side specifically solicited interest and engagement from Korean enterprises in high-tech industries and technologies such as digital transformation, personal data security, and biotechnology.

To that aim, they decided to fully implement the ‘Korea-UAE Industrial Technology Cooperation MOU’ signed in March of last year, identify particular cooperating projects, and host the ‘1st Ministerial-level Strategic Meeting’ at the end of the year.

Furthermore, the two sides agreed to expand collaboration in the fields of hydrogen and renewable energy, as well as a shared awareness of the necessity of clean energy for carbon neutrality and energy transition, which is a shared job.

Korea, in particular, has a significant potential for hydrogen demand for power generation and mobility, while the UAE has plenty of solar and natural gas-based hydrogen production capability. It was agreed to encourage collaboration across the hydrogen sector, including its introduction and use, as well as actively assist the establishment of commercial prospects at the corporate level.

Minister Lee paid special attention to the UAE government, including Minister Al Jaber, in order for Korean companies with hydrogen mobility experience to participate in the hydrogen bus project that the UAE, which will host the 28th Conference of the Parties to the United Nations Framework Convention on Climate Change (COP28) in November next year, is emphasizing.