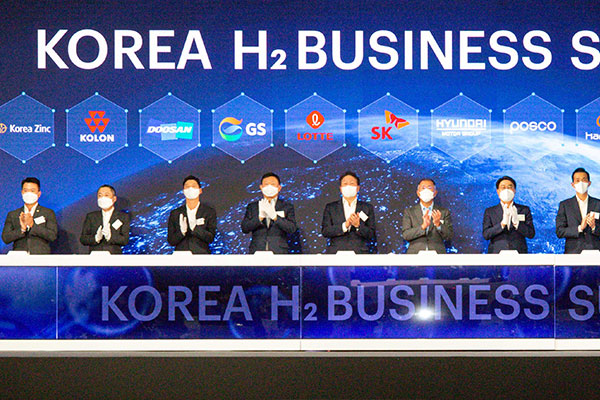 South Korea’s top business leaders have formed a business council to promote hydrogen as a sustainable energy source and develop its value chain.

The Korea H2 Business Summit was created by the CEOs of ten corporations, including Hyundai Motor, SK, POSCO, Lotte, and Hanwha, to boost corporate investments and grow the hydrogen industry’s value chain, which includes production, transportation, storage, and usage.

As part of industry-wide efforts to minimize carbon emissions and grab a rising share of the burgeoning energy market, the business leaders created the Korean version of the Hydrogen Council — a global coalition of CEOs committed to speeding the energy transition with hydrogen.

The H2 Business Summit took place on the sidelines of the H2 Mobility+Energy Show, which began at KINTEX in Ilsan just a few days ago.

More than 150 enterprises and research institutions from 12 nations will be present for a four-day run north of Seoul.

The government’s strategy to transition from fossil fuels to clean and renewable energy as part of its net zero carbon goal by 2050 is expected to benefit from the private sector’s action.

Hydrogen is a greener alternative to fossil fuels because cars that operate on it only produce water in the process of creating electricity. Industrial facilities, notably petrochemical factories, can manufacture it as a by-product.

By 2040, Hyundai Motor Group plans to invest 11.1 trillion won in developing hydrogen fuel cell technologies and expanding their use in various industries, including as robotics and environmentally friendly generators.

The world’s fifth-largest automotive firm, according to its chairman Chung Euisun, wants to create hydrogen fuel versions of all of its commercial cars by 2028.

The SK Group, which includes the refinery-and-battery company SK Innovation Co., aims to invest 18.5 trillion won in facilities that can produce up to 30,000 tons of hydrogen per year and increase charging infrastructure.

POSCO, the world’s fifth-largest steelmaker by output, has announced that as part of its transition from a carbon-intensive industry to a more sustainable model, it will invest 10 trillion won in research into technologies to utilize hydrogen instead of coal during steel manufacturing.